We all know that it is important to take in vegetables as a daily part of our diet. Vegetables are the best source of nutrients and provide us with the necessary immunity strength that we need. However, how much nutrients the body actually gets from a particular vegetable depends a lot on the way it’s cooked and eaten.

We can eat vegetables raw or cooked. By saying cooked, one can mean Frying, boiling or steaming. But which is the best and most healthy way to cook vegetables? Some say that Boiling your veggies is considered one of the best ways to cook them because it doesn’t involve any fat or grease. Some nutrition experts say otherwise that boiling may cause vegetables to lose nutrients.

While boiling the vegetables, the nutrients get dissolved in the water that was used to boil them and gets thrown away along with the water. Certain vegetables like spinach face this problem because they have water-soluble vitamins, which gets strained into the boiling water, thus depleting the vegetable’s nutrients. 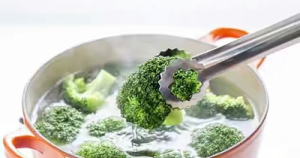 You might wonder if eating the vegetables raw is a much wiser choice. Nevertheless, veggies like carrots prefer to be cooked as they have more beta-carotene in them than raw carrots. Cooked vegetables also get digested more easily than the raw ones.

When it comes to frying, the majority will say that it is unhealthy. But frying with the right oil makes the vegetable preserve its nutrients. sautéing in healthy cooking oil, such as extra-virgin olive oil, is a great way to cook many vegetables. Not only does it maximize the flavour, it ensures to increase the absorption of phytonutrients like phenols and carotenes.

Hence, it’s best to keep cooking time, temperature and the amount of water to a minimum. That’s why steaming is one of the best ways to cook most vegetables. So, the next time you cook vegetables, make sure you do so in a way that retains all the good stuff!