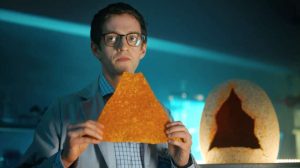 The best part? You could actually win a giant cheese-flavored nacho that’s about 10 inches tall (imagine munching on that beast)! According to Food & Wine, the brand claims the chip was created by Jurassic World scientist Dr. Wu (portrayed by BD Wong) by mingling dinosaur and Doritos DNA.” That’s why they’re so massive!

This crazy large Dorito obviously can’t fit into a regular bag, so it comes in a giant Jurassic metal crate hidden inside a dinosaur egg (what!!)! Unfortunately, there is a bit of a catch! Only 100 of these Jurassic nachos have been made so you have to enter a contest to win one. All you got to do is tweet @Doritos with the hashtags #jurassicdoritos and #entry to enter the competition.

You could also bid on an egg here, where the proceeds will go to benefit the disaster relief efforts by the Red Cross chapter in Hawaii – best of luck!

Taco Bell Launches A Slush With Popping Candy In The US

Believe It Or Not, There Exists An Advent Calendar Made From Cheese