Found: A mini sculpture of the Taj Mahal, constructed entirely from toast

Tom McKenzie was strolling along in South-East London when he stumbled upon the Taj Mahal. Or something quite close – a replica of the Taj Mahal made entirely from toast. Mckenzie then tweeted a photo of it along with “Just the Taj Mahal made of toast left on a street corner in #peckham.” 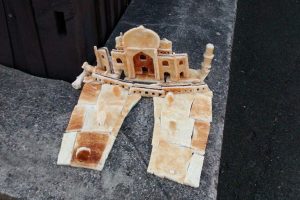 The sculpture was made entirely of white toast, with the edges cut off. What was used to darken the interiors is anyone’s guess; Nutella? Jam? As of now, we have no answers because the creator has mysteriously vanished. Why would he abandon his masterpiece? Do we now have a food-art Banksy?

A Getaway in the City at Dyu Art Café, Bangalore

10 Songs That’ll Have You Dancing Towards the Kitchen