A research has found anti-cancer properties in three traditional varieties of rice native to Chhattisgarh reports the Hindustan Times. The rice varieties, Gathwan, Maharaji and Laicha are said to fight cancer according the scientist, Deepak Sharma.

The rice were found to have anti-cancer properties during a research conducted at the Indira Gandhi Krishi Vishwavidyalaya (IGKV), Raipur and the Bhabha Atomic Research Centre (BARC) Mumbai. The rice varieties were reportedly taken from the rice germplasm bank preserved in the IGKV and these, according to Sharma have the properties that help in curing lung and breast cancer without harming the normal cells. 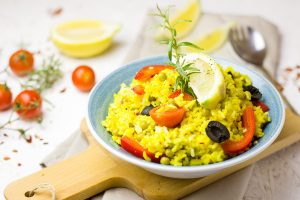 Sharma is the principal scientist at the genetics and plant breeding department of the agriculture university and says that Laicha has been found to be the most effective of the three in the prevention of proliferation and destruction of cancer cells. He further told PTI that the three varieties of rice are used for medicinal purposes in Bastar, which is a tribal area. Gathwan helps to cure arthritis and Laicha is used for skin-related problems, he explained.

Now that Gathwan, Maharaji and Laicha have been found to have properties that stop the multiplication of cancer cells, further research will be carried on by the scientists of BARC wherein they will be extracting the anti-cancer elements from the rice varieties and conduct trials. They aim to develop dietary supplements for easy consumption by the people.

Rs. 10 Meals At Canteens In Gurgaon Under Antyodaya Aahar Yojana

GST Has Benefited The Restaurant Industry According To A Survey