I don’t know. I don’t care.  I am not hungry. I don’t want that. What. Believe us or not, these are the names of the meals in the kid’s section of the menu. These extremely creative and hilarious names were inspired out of kids’ responses to their parents. Parents will relate to this menu because it translates common phrases such as ‘I don’t know ‘ and ‘I’m not hungry’  into meals you can order for them.

This hilarious menu is from Fager’s Island, a restaurant in Ocean City, and a picture of it was posted on Reddit. Now that you finally stopped giggling over the menu, let’s get down to explaining each one of them.

If it’s a confused “I don’t know”, then it is Triple layer PB& J. If its an indifferent “I don’t care”, it’s a Grilled Peanut Butter & Banana sandwich. ” I am not hungry” means Basket of Chicken Tenders. If the child’s response is “What”, then get the kid some Cheese Quesadilla.”I don’t want that” translates into Kids Fries.

This menu had made ordering for kids easier and more fun than the usual negotiations and the crying, and all the chaos that you witness at every restaurant. Take a look at the menu that a customer had posted on Reddit, and from where it went viral, with many parents applauding it and totally relating to it. 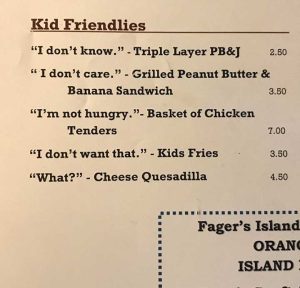