Among domestic workers, the very word, “ration shop rice” is enough to draw ire. If they’re forced to eat it, you might have to look for other help. Such is the scorn with which most products distributed through the PDS are viewed. Only those who have no other recourse will ever brave the scorching heat and stand in line to procure them. Of course, there are exceptions. In Tamilnadu, before the harvest festival of Pongal, free saris and dhotis are distributed to card-holders, in addition to a festive pack containing rice, jaggery, ghee, nuts and spices. Even so, my help, Ratna, has to make several trips to the shop. She comes back often to report that her mission has not been successful, that the shop is closed or out of stock. Moreover, she also has this interesting snippet to share: the person in charge of the shop talks to them from behind the bars of his closed shop, in order to protect himself from physical attack from wrathful women. It’s not enough to shield him, however, from their flood of invective, delivered in chaste “Madras” Tamil.

Why can’t those who need it get it?

That, in a nutshell, is the sad story of the PDS in India. Started at the time of the famine in Bengal and revived in the wake of the acute food shortage of the 60’s, the system is more abused than used. Many who are not entitled to the price subsidy hold ration cards; some families even manage to procure three or four, because it helps them to get an extra gas connection, or some other facility. Migrant labourers are not able to get a card because of lack of a permanent address. In order to address this concern, an ambitious campaign was launched, to give Aadhaar cards to the entire population. That scheme seems to have struck a roadblock on account of the Supreme Court’s ruling that ID cards cannot be made mandatory, since a large section of the population lacks the documentation required.
Another evil plaguing the system, and this, incidentally, is one of the reasons why people like Ratna have to trudge up and down several times and even abuse the hapless manager of the shop, are, namely, that the good grain that is kept aside for PDS is replaced with inferior stock, which is doled out to people like her, while the good grain is sold in the open market. 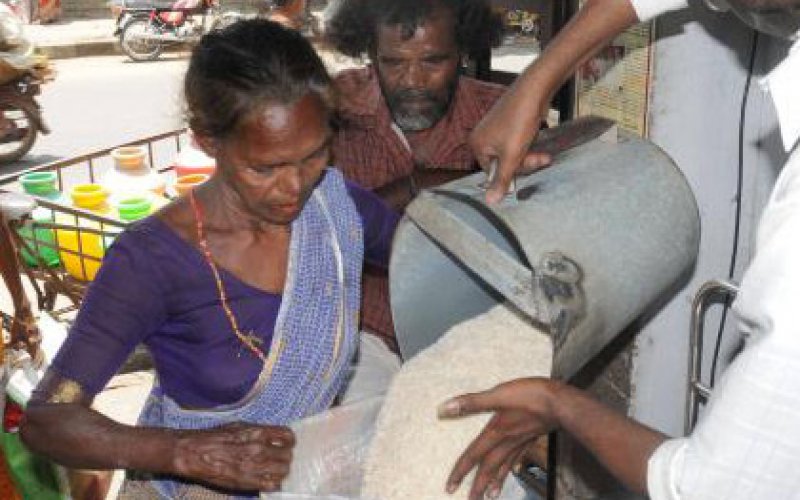 Places like the Union Territory of Pondicherry are now testing the efficacy of fingerprint identification methods. The Union Minister of finance, Arun Jaitley, has suggested the issue of food stamps. Another proposal is Direct Cash Transfer to the account of the beneficiaries. It’s worth exploring any of these options as the present system delivers only 42% to the target group, while more than three-quarters of the population eats less than the minimum prescribed, and one in three malnourished children of the world lives in India. There should be complete transparency and accountability in the procurement and distribution of food, in order to stamp out the systematic looting of our ration shops.

Celebrate Women’s Day with a Special gift from Khandani Rajdhani