Researchers at MIT are figuring out ways to get shape-shifting food onto your plate. Although you may not think it’s as impressive as Rey’s self-inflating bread meal, it’s pretty damn cool.  The team from MIT’s Tangible Media Group created flat sheets of gelatin and starch that transform into 3D shapes, such as flowers and pasta forms, when submerged in water.

Not only does it look pretty freaking cool, but it’s for a good cause as it could significantly reduce food shipping and packaging costs. The “culinary performance art” is a practical way to stack the edible sheets into more efficient packaging.

“We did some simple calculations, such as for macaroni pasta, and even if you pack it perfectly, you still will end up with 67 percent of the volume as air,” said Wen Wang, a co-author of the research, “We thought maybe in the future our shape-shifting food could be packed flat and save space.”

Wang and her co-authors thought up this brilliant food hack after researching a bacterium that changes shape when exposed to moisture. Their epiphany was the realization that the same bacterium is used in the fermentation process of a traditional Japanese food called natto. They decided to test it in the 3-D printing process of edible cellulose onto layers of gelatin containing the bacteria. 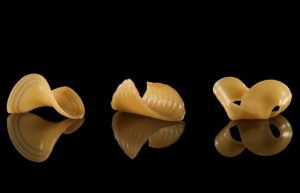 Printing the cellulose into different patterns on the gelatin produced different responses when it was introduced to water. Pretty neat huh?

This also allows for the customisation of designs for noodles and hopefully, in the future, will enable customers to create their own noodles! The future of noodles looks pretty bright indeed.