When it comes to unwinding and relaxing, there’s arguably no better approach than a day at the spa, or a glass of wine. Or both. Imagine this, you’re at the spa, ready to step into the swimming pool, and you realise it’s full of wine. Sounds like a dream, right? In Japan, it’s not! There exists a spa in Japan where you can swim in a pool full of Merlot. 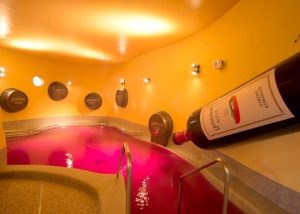 The Yunessun Spa Resort is described as a spa theme park that’s set at the foot of lush green mountains which offers a plethora of refreshing spa treatments one might expect from such an establishment. But what makes the place stand out are the theme baths, which are claimed to be like nothing else in the world. The complex offers a number of theme spas such as the Roman-styled Ancient Roman Bath or the massive God’s Aegean Sea.

However, it is the drink-themed attractions that steal the show. Imagine relaxing in a pool full of Red Wine, you could probably get high on the smell of all the wine around you. In addition to the wine spa, they also have a Green Tea Spa, a Japanese Sake spa, a Coffee Spa, and a pepper-water filled Ramen Noodle Spa. The pools are filled with the actual drink, and not just colored water. And while you maybe tempted to take a sip, that would be highly inadvisable. 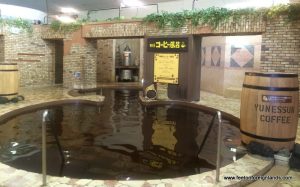 Each themed bath also features over-sized drink containers associated with the bath. For instance, the wine bath issues from a giant wine bottle, and massive fake noodles hang over the ramen pool. Baths can be both relaxing and fun but Yunessun has finally created baths that can make people hungry.

A Sneak Peak Into Food For All: An App To Combat Food Wastage

It’s Official: Heritage Foods To Be Bought By Future Retail