Culinary trends are a bit similar to those in fashion: it is enough for one major influencer to come up with a new and exciting combination and the whole world immediately starts to follow it. And chefs are spinning a spice roulette wheel to thrill your taste buds every year, coming up with bolder dishes, new combinations of ingredients and spices that push the limits further and further. Others come up with crazy things like the Cronut, not long ago, creating a veritable craze around them. But let’s not venture into the world of disruptive cuisine right now. Instead, let’s take a look at some of the food trends that will shape the rest of 2018. 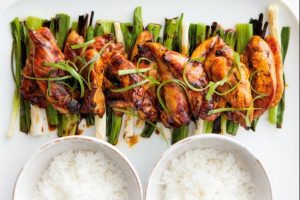 The Western world had long ago developed a taste for oriental dishes. Sushi, lo mein, and curry are now an integral part of their cuisine, cooked at home and at restaurants pretty much all over the world. But this year, we can expect the East to make its presence felt in the form of flavors rather than dishes. Food experts expect to see a variety of traditional Western foods to incorporate the aromas of the East this year.

And the cuisines with the biggest influence on the dishes of 2018 will no longer be the Chinese, Indian, and Japanese ones, but those from the Middle East and North Africa which will make their presence increasingly felt. So, expect harissa to join sriracha and Tabasco sauce on the table this year.

Speaking of disruptive cuisine, there is one interesting trend that seems here to stay for the long run: meatless meat. On one hand, companies like Beyond Meat are presenting a series of plant-based meat alternatives to their customers, offering them the same taste, the same texture, and even a comparable protein content. On the other hand, the first restaurant serving lab-grown meat has already opened – it is called Bistro In Vitro and it has dishes using meat grown from animal stem cells. It is indeed a humane way to take care of your protein needs – and the taste, well, it should be the same as the real thing.

Veganism was for a long time associated with clean eating – but it will no longer be the case in 2018. But the craving to indulge oneself with a juicy burger, a serving of hot wings and other dishes considered “junk food” is present in pretty much every human. To satisfy these cravings, an ever-increasing number of restaurants will offer their patrons comfort food – “dirty” food, if you like – made of completely vegan ingredients.

Some already have: Norman’s Coach & Horses in London, the city’s first vegan pub, offers a dish called “Tofush and Chips”, a vegan take on England’s national dish, while Temple of Seitan in Hackney, the UK, has all kinds of indulgences like burgers and hot wings, all of them 100% vegan.