Just when we think all is right with the world, news comes around that shakes us to our very core. You may think I’m just exaggerating, but this food news is something we just can’t ignore. New York City is known as the experimental food capital of the world, but this time I think they’ve gone too far. The new food fad is donuts – wait for it – made out of spaghetti.

Pop Pasta, who makes the spaghetti donuts, says they are a spinoff on spaghetti pie, which it calls a “Neapolitan tradition.” The donuts are baked into rounds either flavored like carbonara, bolognese or red sauce and may be eaten room temperature or warmed. 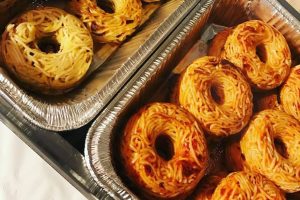 I, like the majority of the world, believe that donuts were intended to be a sweet good, if it’s savoury then it’s a bagel. If it’s made out of pasta then it’s not really a donut, is it? Is it like lasagne but shaped really weird?

I mean, there’s a sushi donut and that appears to have settled well with people. It looks delicious, unlike the spaghetti donut which to me has the appearance of canned soup sans the can. I’m also not so sure about Pop Pasta marketing it as an easy picnic food. For starters Is spaghetti a food that people secretly want to take on picnics and will this make it easier for them to make a reality. Are they making some people’s dreams come true or is this as uncomfortable for everyone else as it is for me? 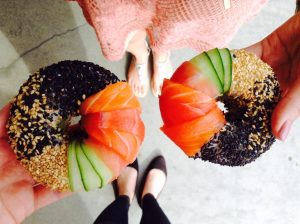 If it ain’t broke don’t fix it right? When will people learn? I can agree that we all have different tastes (I mean clearly! Some people like pineapple on pizza!) but it remains to be seen if there really is a market for the spaghetti donut.

There’s A War On Twitter Over Starbucks’ Plan To Hire 10,000 Refugees