First, let’s talk about the World’s Smelliest Fruit, Durian. It is an Asian fruit which has such a potent smell that it is banned on the Singapore transit, no kidding! But is it edible? Yes, absolutely and in fact it is a tropical fruit which is packed with energy, vitamins, minerals and phytonutrients which are good for you. Now, let’s head back to the café that makes the most out of this exotic fruits.

Unlike the Singapore transit authorities, the Mao Shan Wang Café do not shrink their noses at the smell of durians. On the contrary they create tempting dishes out of the freshly sourced durians which they import all the way from Malaysia according to a video by the Insider. They cut into the outer layer, deseed the fruit and then whip the pulp and use it for cooking. 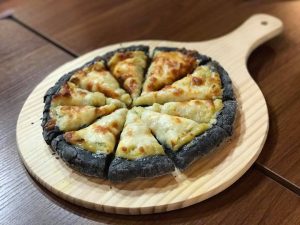 The delightful dishes that they whip out includes a black charcoal pizza on which they don’t forget to spread some durian pulp right before sprinkling the shredded cheese. They also make charcoal waffles which after they are cooked is served with a durian ice cream. All their desserts have to have durian and so does the dip that is served with fries. Some of the delicious desserts include the durian strudel and durian flavoured frozen yoghurt.

Dilli Diaries: The Story Behind Delhi’s 5 Most Iconic Food Spots

6 Wine Cellars In Delhi That Deserve An Award