We all know that nasty feeling of waking up hungover (aka Monday morning) stumbling to work and just wishing you had a pint of beer on hand to make you feel better (no, it’s not a myth, it works). However, it seems that drinking a pint of beer has other amazing benefits (other than that buzz obviously) that we never knew about!

According to new research, drinking two beers is more effective at relieving pain (not just emotional pain, who knew?) than taking painkillers. Yes, you read correctly. Beer > pain killers. Over the course of 18 studies, researchers from the University of Greenwich found that consuming two pints of beer can cut discomfort by a quarter.

By elevating your blood alcohol content to approximately 0.08 per cent, you’ll give your body “a small elevation of pain threshold” and thus a “moderate to large reduction in pain intensity ratings”. 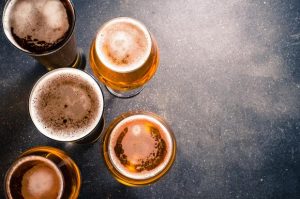 The researchers explained: “Findings suggest that alcohol is an effective analgesic (a fancy work for a painkiller) that delivers clinically-relevant reductions in ratings of pain intensity, which could explain alcohol misuse in those with persistent pain, despite its potential consequences for long-term health.”

It’s not clear, however, whether alcohol reduces feelings of pain because it affects brain receptors or because it just lowers anxiety (ah, finally so many questions answered), which then makes us think the pain isn’t as bad.

However, experts are also speaking out to clarify that the results of the new study don’t mean alcohol is good for us. Rosanna O’Connor, director of Alcohol and Drugs at Public Health England, said: “Drinking too much will cause you more problems in the long run. It’s better to see your GP.”

Government guidelines in the UK recommend no more than 14 units of alcohol a week for both men and women, which equates to six pints of beer, or six 175ml glasses of wine. While it’s just a recommendation (so you can ignore it at your peril) it’s important to drink responsibly and always remember, no pain, no gain. Jk. Please see a doctor.

Related Topics:beerdrinkPain Relief
Up Next