In something that reads straight out of a Tintin adventure a severed, mummified toe was stolen from the Downtown Hotel in Canada. Prepare to get squeamish because this toe was used to prepare their famous Sourtoe Cocktail in their bar.

The tradition started (because, Canada, jk) after a man had to amputate his toe due to frostbite and preserved it with alcohol. A native discovered it years later and apparently their first order of business was to make it a cocktail? In order to get inducted into the Sourtoe Cocktail Club, one must actually touch their lips to the toe (ick). 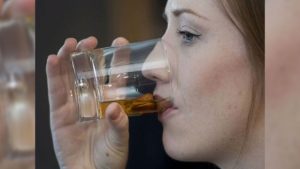 Here’s where the intrigue happens. According to the waitress, a couple had ordered the cocktail and requested the unique drink but the waitress was called away after pouring two shots. The toe was gone when she returned. The hotel stated that they had various severed toes but this one was the most potent (whatever that means).

However, here’s where it gets really odd. After a couple days of the story making headlines around the world (it’s a stolen severed toe, of course it did). The thief called the hotel and gave a verbal apology along with the affirmation that they had mailed the toe to the hotel.

The package, containing both the toe and a letter of apology, arrived Thursday and was opened by an RCMP officer, who said the toe was believed to be in “good condition.” The RCMP say that it’s unlikely that charges will be pressed.

A Bite From The Lone Star Tick Can Make You Allergic To Red Meat!