Some movie moments just stick with you for life. Ramadan is upon us, and foodie buzzwords like ‘biryani’ and ‘haleem’ and ‘pulao’ are popping up all over social media and restaurants across India. Every time we think of pulao, we immediately remember that scene in Cheeni Kum, when Amitabh Bachchan, who plays Buddhadev Gupta  is sent a plate of Nina’s (Tabu) Hyderabadi Zafrani Pulao, so she can enlighten him about what the best pulao in the world actually tastes like.

Buddhadev and Nina meet after Nina sends back a pulao to the kitchen in Spice 6, one of London’s top restaurants which specialises in Indian cuisine, run by Buddhadev. Highly offended, Buddhadev heads out to the restaurant to chastise her. After a couple of show downs, the two eventually become friends and fall in love.

You could say that the two are brought together by biryani. In a tribute to the film and since pulao is such a popular dish during Ramadan, we’re sharing a recipe for Hydrebadi Zafrani Pulao, adapted from Buddhadev’s instructions.

Serve it as a main course for lunch or dinner with a side of raita and onions. 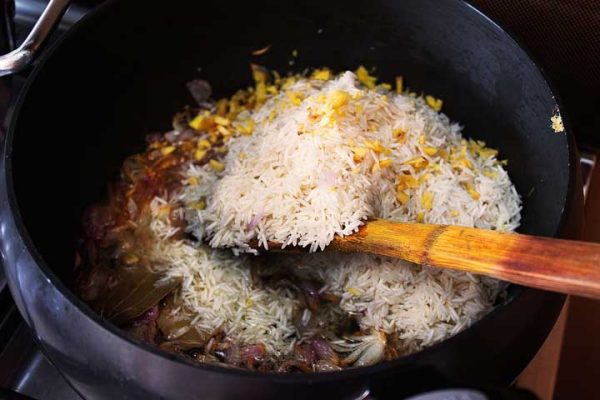 Lazy Person’s Guide to Making Eggs In A Cup | Recipe