In a first of its travel and food show, Chef Ranveer Brar has hit it up with Twitter India and Tourism Australia to launch a Twitter-based venture, #RanveerOnTheRoad.

The show will feature Brar taking his Twitter fans on a virtual tour through Australia. The chef will be seen visiting exotic locations and exploring some of the best restaurants, wineries, native kitchens and food stories down under. 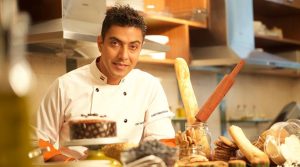 “In each episode, Chef Ranveer will unearth a hidden food story that’s as much about gastronomy, flavors and history, as it is about the heart and soul of the place and the people behind them”, reports Hospitality Biz India.

Starting 21st July ’16, the show will be made up of three minute episodes that the Chef will tweet every Tuesday and Thursday at 11AM IST.

Related Topics:chefsfood articlefood news
Up Next

What To Eat When You’re Expecting, According To Khloé Kardashian