In a new ad commercial, Pepsi appointed supermodel Kendall Jenner as its face. The ad features Jenner striking some sizzling poses for a photoshoot when she witnesses a bunch of protesters going by, calling for love and peace. The model abandons her shoot, switches from top-notch glam gear to everyday denims in the blink of an eye, and goes on to hand one of the police offers a can of Pepsi. The officer then breaks into a wide smile and the crowd cheers on. Pretty sweet, right? Apparently, that’s not what most of the critics thought.

According to the critics, the ad has allegedly been based on recent protests over police brutality against black people in America. And with that in mind, they have deemed the commercial insensitive and have condemned it for painting a “privileged, white” supermodel as a peacemaker between civil rights activists and police.

After Pepsi uploaded the ad on their YouTube channel, people took to Twitter to voice their opinion. Some even pointing out the uncanny similarity between Jenner and a picture of Ieshia Evans who was charged by riot police in Baton Rouge, Louisiana in 2016. Take a look.

Kendall Jenner: Can I copy off of you?

Kendall:* Looks over shoulder anyway*
Damn that. I'm getting this Pepsi money. pic.twitter.com/NUXwCZnM7p

"Kendall please! Give him a Pepsi!" pic.twitter.com/VzJfSha5Mw

In a statement, Pepsi said: “This is a global ad that reflects people from different walks of life coming together in a spirit of harmony. We think that’s an important message to convey.”

Following the outbreak of criticism and allegations of the soda company being insensitive towards the “black lives matter” movement, Pepsi has retracted its ad featuring Kendall Jenner. In fact, people were so outraged by the whole commercial that the beverage giant actually had to issue an apology (or a “justification”, if you may), which was second to another miserable statement, in addition to taking down the video. Take a look. 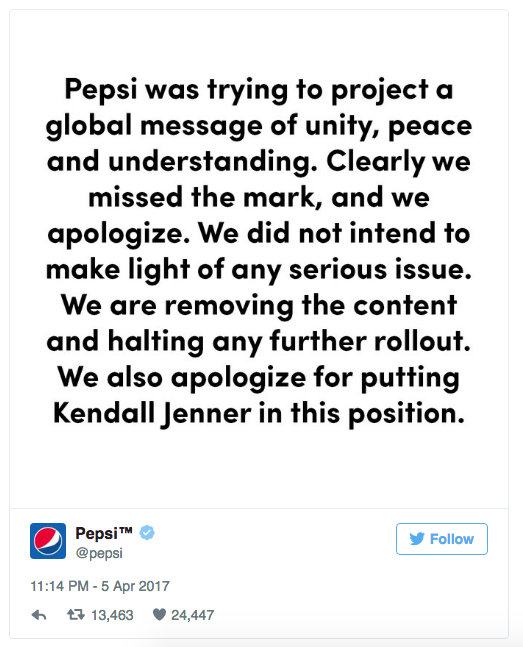 And now that we come to think about it, it’s not just the sensitive civil rights propaganda that Pepsi’s playing on is what really irks our common sense, it’s a lot more than that.

For starters, the frustrated token hijab-clad Muslim girl joining the procession. Really, Pepsi? Might as well throw in a few LGBTQ protesters, anti-Trump demonstrators, and environment activists, and complete the party. Secondly, as Mashable also points out, what’s with Jenner so vigorously wiping her lip color? If anything it sends across a totally messed up message saying, “vanity and sincerity for politics or voicing an opinion cannot go hand in hand”. And that’s just the tip of the iceberg, there is plenty wrong with the commercial. Also, let’s not forget that it was actually shot in Bangkok, Thailand. Yeah, the same country that is currently in a political tussle over its new constitution.

Meanwhile, Jenner STILL hasn’t commented on the issue except for “favouriting” tweets that praised the Pepsi commercial and saying this in a statement prior to the ad’s release.

“I had never been to Bangkok before, so it was interesting to be in that city,” she says. “There were a lot of really cool people on set that I got to meet. It was fun, it was entertaining. The whole concept is really something that I’m about, so it was just fun to be a part of.”

It was FUN AND ENTERTAINING?! Really, Kendall? Fun is grabbing a big mac after your fashion show, fun is travelling the world, tasting all sorts of pasta; fun is binging on Cheetos. And I can’t even begin to imagine how and exactly at what point the model found filming a protest “entertaining”. The last time I saw so many smiling faces in a processing it was St. Paddy’s Day!

Adding to Pepsi’s faux pas was a totally on-point reaction by Martin Luther King’s daughter. Also, for future reference, this (below) is how the police would react if you hovered anywhere near them during a protest. Unless, of course, you are a millionaire, white citizen, privileged national (not necessarily in the same order).

If only Daddy would have known about the power of #Pepsi. pic.twitter.com/FA6JPrY72V

Pippa Middleton Releases A Cookbook, But We’re Not Sure