The beef debate in India is complex and continuous, going far beyond the sphere of food into religion, class, and (groan) even politics. On Wednesday Sadhvi Saraswati, who was speaking at the All India Hindu Convention, said, and I quote; “I appeal to the Government of India that those people who consider eating the meat of their own mother (the cow) as a status symbol should be hanged.”

She then went on to say “They (those who eat beef) should be brought before the public and hanged, then only people will know that it is our duty to protect ‘gau mata’.” First off, Sadhvi Saraswati is indulging in what can only be described as criminal intimidation, which FYI is breaking the law (Section 506, look it up). Secondly, who the heck eats beef as a status symbol in this day and age? 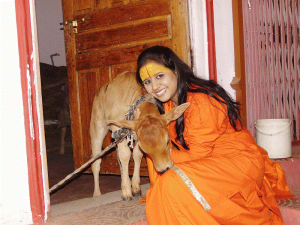 The recent beef slaughters which have taken place in the last couple of months are the result of the perpetration of Sadhvi Saraswati’s mindset – a preacher’s no less! Sorry to break it to you, but if you’re not a judge you can’t say if someone should or shouldn’t be hung and for what crime (if you do, you’re committing a crime, the irony)!

Are we in North Korea where everything from our diet to our haircut is dictated? Proposing that eating beef is a crime is laughable, but stating it should carry the death sentence is downright ludicrous.

When did an individual’s eating habits become tantamount to a crime? Why has beef become such a politicised issue in one of the world’s largest functioning democracies? Why does the government turn a deaf ear to “beef crimes” committed all over India? If eating beef is a crime according to Sadhvi Saraswati, serve me a steak, medium-rare, because I’m proud to be guilty.