McDonald’s has a new vegan burger. *mic drop* While a vegetarian burger isn’t new to us on the subcontinent thanks to the McAlooTikki, and the McVeggie burgers (yes, these are real burgers in India) a vegan option is something we haven’t seen before.

The burger, so originally named, the McVegan, is only being served on a trial basis in Tampere, Finland from October 4 through November 21. It’s reportedly made with a soy patty and includes many of the toppings you’ll find on a regular burger such as tomatoes and lettuce (sans the cheese, of course). 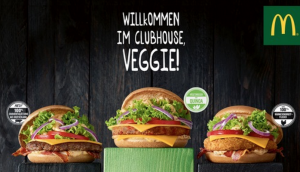 While the McVegan is certainly a welcome step to the vegan community, one can’t help but wonder how strictly McDonald will adhere to the vegan code. Will they fry the vegan patties on a different grill, and, even if they do initially, how long will it stay that way?

To be honest, the idea of McDonald’s going the vegan route is a bit like if the late Hugh Hefner decided to go the chaste route. You have to wonder if it will actually happen, or if it’s just a publicity stunt where who knows what is happening behind closed doors.

Undoubtedly, McDonald’s is following in the footsteps of other fast food restaurants who have added vegan dishes to the menu. However, currently, there are plenty more ‘junk food’ options for a vegan to choose from that are much more appetising, and a half-hearted, last-ditch attempt from McDonald’s probably isn’t going to cut it.

FreshMenu Is Launching A Physical Store At The Bengaluru Airport