Recently, I heard that McDonald’s had decided to start trialling cutlery in some of their outlets and I was shook. Apparently, in an effort to keep up with the ‘gourmet burger joints’ in France (of course) they have resorted to this drastic step.

The LadBible reports that the knives and forks will only be given out for anyone ordering one of the new ‘Signature’ burgers – which cost twice as much and are cooked to order. They’re served on a brioche-style bun and have toppings such as blue cheese and bacon. 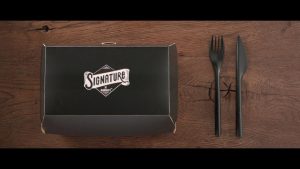 I’m all for the fancy pants blue cheese toppings and fresh beef but the cutlery takes it too far! The best part about eating a burger is picking it up with both hands and just going at it. You really get the perfect ratio of every part of a burger and that’s what makes it so awesome!

You miss out on all the beef patty juice as well! And isn’t gourmet burger an oxymoron? If you wanted something posh then maybe McDonald’s isn’t the place for you? The new gourmet burgers are going to be more expensive and take longer to make. But McDonald’s is a fast-food joint?

There are just too many things that I don’t understand. We know that the French are rumoured to be picky eaters but changing the whole modus operandi of McDonald’s is next level! We don’t even know if this new cutlery pushing is going to be successful! I say, if it ain’t broke, don’t fix it!