It’s not news that the Amazon-Whole Foods deal has got the grocery world in jitters. However, the latest victim of the acquisition was none other than Blue Apron. The initial price of their IPO was $15 to $17 but they were forced to lower it to $10 to $11 after apprehension from investors.

According to Reuters, investors were worried by lack of profitability as well as competition from Amazon. Blue Apron, which is America’s largest meal kit provider, only raised a third ($300 million) of what they had expected. They were the first meal kit company in the States to go public and it was the hope that they would set a precedent for other companies.

Unfortunately for them, the Amazon-Whole Foods deal disrupted everything. Amazon already had a small meal-kit business in place, that delivered ingredients and recipes to customers in a handful of U.S. cities. With the Whole Foods deal they have access to ready-made distribution system for food delivery thanks to the stores that Whole Foods have. 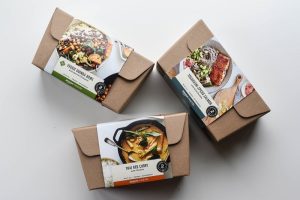 It’s common knowledge that we”re all suckers for a good deal, and that’s exactly what Amazon is going to offer. They are much larger than the other meal kit companies and now they have easy distribution at their fingertips. Unfortunately, this is one of the many downsides of a “free market” economy.

Amazon, with all it’s monetary power and ability to slash prices and new distribution channels may have the ability to turn into a pseudo monopoly in the States. Smaller retailers, like Blue Apron may be able to hold on for so long by cutting their pricing, however, it’s definitely not long term.

Other companies that were hoping to follow in Blue Aprons footsteps will probably hold off for a while. This is because of the higher expense of marketing thanks to consumers non-committal approach to brand loyalty. Other companies such as Maple and SpoonRocket have already shut down.

In my opinion, it’s only a matter of time before Amazon’s monopoly on deals and distribution spell the death of free competition in the grocery sector.

Opinion: McDonald’s Is Going Gourmet And I Don’t Know Why