In yet another attempt to save costs the Maharaja decides to eliminate non-vegetarian meals altogether for all the economy class passengers flying domestic. The airlines however will continue to serve meaty meals to the business and executive class fliers. This plan was already in the pipeline for the year 2016 as reported by us earlier.

Air India Chairman Ashwani Lohani told The Hindu, “We have decided to serve vegetarian meals in our economy-class seats on domestic flights. It also eliminates the possibility of mix-up: a non-veg meal getting served to a vegetarian passenger, as it had happened a few times in the past.” A mix-up issue happened in Shanghai-Delhi-Mumbai flight last year where passengers who asked for vegetarian meals were served non-vegetarian food.

This move would lead to saving up to eight crore rupees annually said a senior official of Air India. Currently the airlines is spending Rs.400 crore on catering. 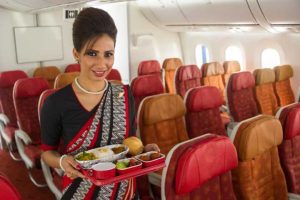 He also talked about how people do not choose their meal preference while booking their tickets due to which the airlines is kept in dark of their choices.

Certainly it’s not a great move what with the secretary-general of Air Passengers Association of India commenting, “A full-service carrier like Air India should not resort to such a measure. Even a low-cost carrier gives the passengers their food options. Air India should have conducted a passenger survey before taking this drastic step, and it should immediately withdraw the decision.”

Hot Dog Festival at The Irish House Outlets across Mumbai