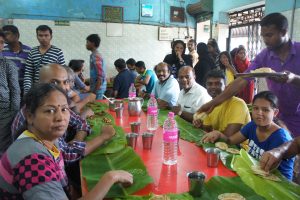 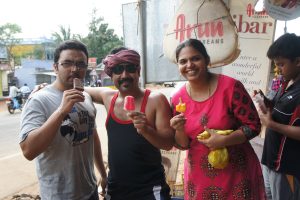 It used to be known as Hotel Rahmath on the Kerala border, a simple, unpretentious roadside eatery, where the well-heeled rubbed shoulders with truck-drivers, where parathas were, quite simply, “barottas” and one had to shout to be heard during the Kuttralam season, where everyone was served on leaves and everyone, that means everyone, had to clear off their own leaves and where there was a unique waste disposal system to which I shall come back later.

Today, it has expanded to two outlets, more or less side by side, opening the second one only when there’s a rush. They call themselves Hotel Border Rahmath now, but otherwise very little has changed about the place. The “kuska chicken gravy”, meaning chicken gravy with nil chicken pieces or even bones, is still made exclusively at the owner’s residence, the ingredients known only to the family. The chicken cooked is still only country chicken, fried (!) lovingly in coconut oil and local spices, in vintage Tirunelveli style.

In the busy and crowded Kuttralam season, a waiter brings barottas in a cane basket and serves everyone three small barottas to start with. Three’s a set. Then they bring in vessels of gravy with a ladle, about one vessel for every four persons, and place them in the centre aisle of the table. You’re expected to drench your barottas in this gravy as they’re fried crisp. I’ll describe later the mode of making these barottas. We see that only as we’re leaving, and believe me, it’s better that way.

Then portions of chicken, maybe one chicken cut into two pieces and fried. Each person is served one piece.

This is the basic menu, served as one would be in one’s own house. You can ask for more and more sets of barotta or chicken. And you can order extras, such as “kadai fry”, or the same chicken shredded and fried, ok, sauteed with a generous sprinkling of onions, “half-oil” eggs, which is native lingo for bulls-eye, or eggs made to order, “ lapa barotta”, which is again an import from Malaysia or Sri Lanka. It’s made by coating both sides of the barotta with beaten egg. Oh, and “kothu barotta”.

In the off season, they stretch themselves to eight kinds of barotta, including the famous “veechu barotta” and “puff barotta.” In the mango season, you can order a plate of freshly cut mango from the nearby fruit stall. And now, they’ve acquired the neighbouring juice and ice cream stall, so you can call for dessert too if you’re too stuffed to move. You can discuss real estate and the prices of automobile accessories with the cheery waiter or proprietor, because, by now, Rahmath has a finger in virtually every business that goes on in town.

One wonders how they keep count of what everyone’s eating, but they seem to have some method of their own, for at the end, you’re presented with a blue piece of paper with several figures written on it, no explanation for each, no questions asked, no answers given, and you pay and leave, knowing that you’ve truly received your money’s worth, as about twenty gluttons have eaten to their heart’s content and still you’ve paid only about three thousand rupees, which works out to a paltry one hundred and fifty rupees per head. Sugared fennel (sombu) is kept near the billing counter to freshen your mouths. All the bearded waiters, uniformly called, “ Bhai”, look fresh and unflustered even during the busy season, when there are crowds waiting to be seated.

And then you see them making their barottas. Infinite numbers of small barottas are placed on a gargantuan tawa. A chef approaches with a bucket of oil and whoosh! There you go. And I naively thought he was carrying a bucket of water. Well, well, we all live and learn. But for all that, if you stick to less barotta (carbs) and more chicken, you’re left with a surprisingly light feeling at the end of it all. Obviously.

Now for the unique and efficient waste disposal system which used to be in practice, which has since been discontinued. There’s an opening in the wall, with a sliding chute at the other side, leading to a vacant plot. As you carry your leaf gingerly to this aperture, you see two beady eyes looking at you eagerly from the opening of the chute. You shove your leaf through, and it’s none too gently yanked from your hands by a pair of canine jaws. And it’s gone, bones and all. No garbage to clear. A mode that could be emulated elsewhere. Maybe someone complained about the cruelty of feeding bones to hungry strays, and so now they’ve placed a colossal blue garbage bin in the corner near the wash basins and you throw your leaf there.

What makes Rahmath a place you want to go back to, time after time? People drive from Kerala in expensive cars and wait for their turn. Crowds of ravenous bathers come in, still in wet clothes, and put away incredible quantities, as the pile of bones on everyone’s leaves can vouch for. One can only hazard a guess as to how many eggs and chickens they order each day. Nobody’s telling, but it must be an astronomical number.

Even those who wouldn’t otherwise be caught dead at a roadside barotta stall are there, Gucci sunglasses and all, wolfing down “unhealthy” maida rotis. It must be the ambience of the place itself, coupled with great taste and honest service, which makes it irresistible. That, and the generally lax dress code that prevails in Kuttralam, where a lungi and sleeveless banian are acceptable for dinner with friends and family, replete with the famed Kuttralam towel slung over one’s shoulder, or tied as a turban. I’ve seen great business magnates dressed like this, only in Kuttralam. There’s something in the air there that makes you want to get up to monkey tricks. When you’re not too busy eating at Border Rahmath, that is.

5 Sunday Brunches in Mumbai you don’t want to miss.

One Great Reason among Fusilli Reasons