A YouTube video by ASAP Science has been doing the rounds which basically tells you ingesting ‘this much will kill you’. While the title itself is far from comforting, what was comforting was the knowledge that you would need to eat 10 1/2 cups of sugar before it kills you (great, just 4 more soft drinks to go, jk). However, we were slightly disturbed by the fact that 2 teaspoons of nutmeg could kill you.

Honestly, while most of us only whip nutmeg out during the festive season, the news that only two teaspoons are enough to cause convulsions and possibly death isn’t the best thing to hear (especially on Monday morning, the Faris-Pratt news already left me shook).

It turns out that way back in the 12th-century people used to get high on nutmeg (no, I’m not kidding). The side effects of this hallucinogenic high include nausea and dizziness, as well as what feels like a “two-day hangover”. 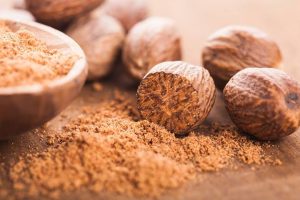 The study also determined that 5 to 15 grams (that’s 1 to 3 teaspoons) is the reported toxic dose. This intoxication usually passes in 24 hours, the report says, though in some cases psychosis has set in for up to six months. The report also said that only one death, to their knowledge, has been attributed to excess nutmeg consumption, and that was an eight-year-old boy.

Whatever the case may be, you can bet your bottom dollar that we’ll be treating nutmeg with a wary eye from now on. From çheery Christmas spice to hallucinogenic killer – who would have thought?

Related Topics:nutmegscienceThis Much Will Kill You
Up Next

Kanazawa Ice In Japan Sells Popsicles That Do Not Melt

Prosecco Pong For When Beer Just Won’t Cut It