New Zealand’s Prime Minister, Bill English, just showed the world that there does exist something worse and more horrid than pineapple on a pizza. Earlier this week, the political figure took to social media to share pictures of himself with a dinner that he had whipped up for his kids. Quit a sweet deed, one may think. Until one hears of what this dinner actually entailed. 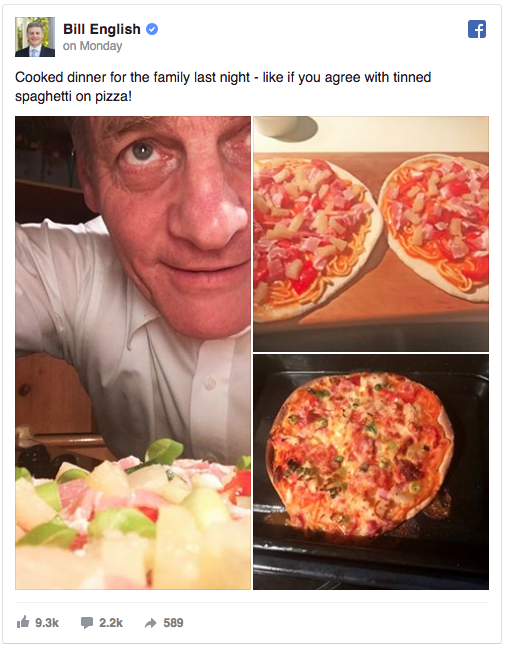 And that’s another PM involved in the pineapple pizza debate. Needless to say, people on social media were outraged. Here’s what twitteratis thought:

Bill English: I'm in trouble for covering up possible war crimes.
Crosby/Textor: Divide the left by posting your terrible pizza.

“If you’re trying to deflect attention from Afghanistan or the continued mismanagement of common pool resources you’re doing a good job mate because this is a monstrosity. Couldn’t even keep the toppings from sliding off the base?” wrote one outraged commentator.

Although, there were a few who actually understood what made PM English go down such a twisted path.

Leave Bill English alone. If you had 6 kids canned spaghetti would be the height of gourmet cooking for you too! #nzpol

But despite all sorts of hilarious and downright creative reactions on Twitter, the Italian Embassy in Wellington took the cake. Or should we say pavlova? The embassy responded with an equally horrid, but funny in the light of the events, picture of a pavlova – a popular dessert native to New Zealand. Those who have tasted a pavlova may argue that nothing much can be done to ruin the sugary food, which is true, unless you top it with salami in place of fresh fruits!

Vendetta for PM's pizza with tinned spaghetti and pineapple#salamipavlova pic.twitter.com/bj65jQMhLd

Yep, the embassy had the perfect ingredients to feed their vendetta in the pantry! A gorgeous pavlova decked with slices of meat and what we think is whipped cream. Nauseating would be an understatement.

However, such was the fame of English’s spaghetti pineapple pizza that even late night show host Jimmy Kimmel couldn’t resist from talking about it on his show. “We can be pretty hard on Donald Trump but they have a guy in New Zealand, the Prime Minister of New Zealand, a gentleman named Bill English, who I think is even worse and I’m going to show you why,” Kimmel said. Take a look!

Chance The Rapper To Star In Kit Kat’s Halloween Jingle