I know that 2017 has been hard, but here’s some news that will definitely brighten up your day, your week, your month or even your year! Italian Chef Pasquale Cozzolino has claimed to have dropped nearly 100 pounds on his new pizza diet. After Chef Cozzolino moved to New York in 2011 he gained quite a few pounds due to stress and NY’s famous food.

According to the New York Post  Cozzolino said, “I’d eat 10 or 12 [Oreos]. One time I even ate the whole box. It was like a drug for me.” He was also drinking two or three cans of soda each day. By early 2012, his weight had ballooned to 370 pounds, and he was wearing pants with a 48-inch waist.

Cozzolino recounted that upon his return to Italy his relatives and even his immediate family didn’t recognise him which affected him both mentally and physically.

“I had knee problems, back problems, three ulcers in the stomach,” he recalls. His wake up call finally came when his doctor told him that he had to lose weight or run the risk of a heart attack. He immediately went on a diet to get back into shape. 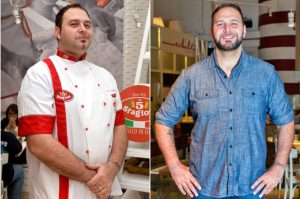 Cozzolino cut out sweets and soda entirely, started eating half of his usual portions, focused on a Mediterranean diet with plenty of fruit and vegetables ­— and looked to his restaurant’s menu. Every single day he has a margarita pizza for lunch.

However, Cozzolino explains that his Neapolitan-style pizzas, used for his pizza diet are not the regular slices you get at a deli. The dough is made from just water, flour, yeast and salt — no butter or lard — and the toppings are light — fresh tomato sauce, a thin layer of mozzarella cheese and basil. Plus his dough ferments for 36 hours, a process that eats away much of the natural sugars and leaves healthier complex carbs, which are easier to digest and help keep you feeling full.

“It lets you feel satisfied, and because it’s only 540 to 570 calories, it’s a perfect and fast solution for a lunch or dinner,” says Cozzolino, who’s supplemented the diet with kickboxing classes two or three times a week. So, in case you’re losing hope with your regular diet, hop on the pizza diet bandwagon and drop a few!

Restaurants Are Backing Out From Food Tech Startups Like Swiggy & Shadowfax