Netflix first hit the Indian subcontinent two years ago, and it’s no surprise that they’ve become massively popular, thanks, in part, to the large number of original series it produces! Their food programmes Chef’s Table, and low-stakes baking show ‘Nailed It’ (we all lived for the Queer Eye crossover episode) are already big hits, and now, Netflix is adding another cooking show to their roster.

The Final Table is an elimination-style culinary matchup that has been described as “a global culinary competition” which features “12 teams of two chefs from around the world cooking the national dishes of Mexico, Spain, England, Brazil, France, Japan, the U.S., India (YAY) and Italy.”

Each episode will focus on and highlight the cuisine of a different country with celebrity ambassadors, food critics, and one of the selected country’s greatest chefs serving as judges. Each of the world-renowned chefs will vie for a single spot—to be awarded in the finale—at the “Final Table” which is “made up of the greatest chefs from around the world.” 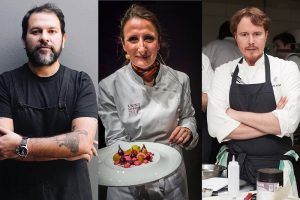 Chef Vineet Bhatia (*sings he’s one of our own*)  will be judging the teams alongside Clare Smyth, Helena Rizzo, Anne-Sophie Pic, Vineet Bhatia, Carlo Cracco, Yoshihiro Narisawa, Enrique Olvera, Andoni Aduriz, and Grant Achatz. Hosting the “Final Table” will be James Beard Award-winning writer and Bon Appétit editor, Andrew Knowlton. It looks as though Netflix has pulled out all the stops for this one, so make sure to add it to your list as it’s all set to debut this year, we mean, there’s no such thing as too many cooking shows.

Related Topics:chefscookingnetflixThe Final Table
Up Next

Amul Is Planning To Educate Customers All About ‘Real’ Cheese