Jordan or officially known as the Hashemite Kingdom of Jordan is a relatively small kingdom in the vastness that is the Middle East and this lucky foodie had a chance to visit this small yet, powerhouse of a country. Built on mountains and in valleys, Jordan shares borders with Iraq and Syria and has grown over the years into a strong and developed nation, remaining peaceful and stable in an otherwise war-stricken area.

With its ancient Roman city of Jerash and the Nabatean (Ancient Arab Tribe) mountain city of Petra, or more famously known as the location for blockbuster movies like Indiana Jones and Transformers, Jordan has become a cultural and historical hub for tourists all over the world. Apart from being a testament to culture and history of the years, Jordan is also home to unbelievable food which I had the opportunity of experiencing.

Before we get to the food, let me introduce you to my driver Haythem, a well-learned man of about 60 who was my companion and tour guide for the duration of my stay. With his exotic accent, kind demeanour and extensive knowledge, Haythem became my friend in minutes. I wasted no time in telling him about my job, hoping he got the point – he needed to take me to the best restaurants in Jordan.

As my luck would have it, Haythem was a fellow foodie and was fascinated to know that eating and writing about food was actually a job. “I will take you to eat Mansaf for lunch. You will love it Shaddon.”(I stopped telling him it was Sharon after the first 6 times.) But I was intrigued. Mansaf? I’ve never heard of it before. He explained to me that it was yoghurt, lamb and rice. Like Biriyani, I thought.

After spending 4 hours walking the city of Jerash, listening to tales of Roman guards and lost cities, I was famished and couldn’t wait for my first bite of Jordanian food. We arrived at a restaurant called ‘Al Khayyam’ and Haythem ordered a tray of Mansaf. I asked him, “One tray for two of us?” Thus, unfolded the story of Mansaf.

Mansaf is the national dish of Jordan, traditionally served on special occasions of weddings, births, graduations or major holidays like Eid. Historically, it’s the dish of the Bedouins, a semi-nomadic tribe that roamed the desserts of the Middle East and who to this day dwell in the caves of Petra. Mansaf is made of a lamb (meat from sheep) that is cooked in a fermented yoghurt called Jameed and then served on a bed of rice. The Jameed is the key ingredient in Mansaf and although it is available in stores, the Jordanians buy it from its source: the Bedouins. Goat’s milk is placed in large sacks made of goat skin and shaken till the milk solid separates from the liquid. The butter on top (milk solid) is scooped from the top and later used to make local ghee. Salt is added to the remaining liquid and heated and dried till all that is left is the solid part. It is then placed in clay pots and left buried in sand for up to a week until rock hard Jameed balls are formed. These balls last up to a year or two, an ingenious tactic for the tribes who have no access to refrigerators or storage options. 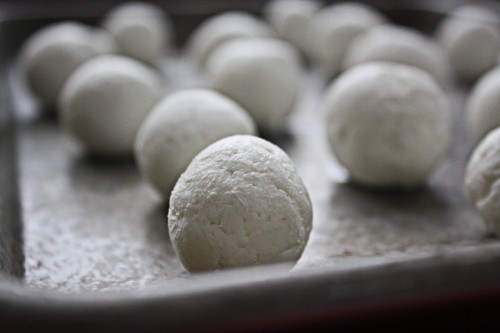 In order to cook Mansaf, the Jameed balls are broken off and then soaked in water in order to get a yoghurt-based sauce. While listening to the mesmerizing story of Mansaf and the Bedouin way of life, my own little tray of Mansaf was served in front of me. Succulently cooked lamb placed on a bed of rice with Shrak bread underneath with a large bowl of Jameed right next to it. Why only one tray? Mansaf is traditionally eaten at communal occasions with upto 4 people being seated at one tray and eaten by hand; roll your ball of rice, filled with meat and Jameed and chuck into your mouth without having your hands or fingers touch your mouth. Eating Mansaf is an art by itself, mastered by the old generation.

Haythem and me started on our bonding tray as being served Mansaf in a Jordanian house is the ultimate sign of generosity and hospitality (Haythem may not have cooked it, but I like to think he would have if time permitted). I poured Jameed over my rice, stripped tender meat of the lamb (it literally fell off the bone), rolled it up and put it in my mouth. The meat was soft and well cooked with a myriad of flavours. The Jameed was rich and creamy and was the thread that held the whole meal together. And it’s nothing like Biriyani. End the meal with a traditional Jordanian sweet- Kunafeh (More on that later) and you’re going to have a hard time moving to the next historical stop on your to-visit list. If you ever find yourself in Jordan, do not leave the city without trying out this delicious delicacy.

Have A Hoppy Journey At Plaza Premium Lounge