Avocados have never been hotter in America, and Mexico knows it, as over 80 percent of the States’ avocado imports come from Mexico, according to Reuters. While Trump has threatened to revamp the 23-year-old NAFTA accord, Mexicans are showing them, just how much they’ll miss out on the free trade agreement in the best way possible – smashing the Guinness World Record for the largest guacamole.

The record breaking guacamole took 25,000 avocados and 1,000 people to mash them all and create the largest pot of ‘green gold’. 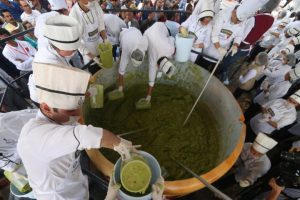 US negotiators have said they want to include provisions to make it easier for US seasonal produce growers to be able to file anti-dumping cases against Mexico.

That idea has been criticised by US restaurants and retailers which say it would drive up prices. Mexican growers say US production of avocado cannot meet demand. “The imports of avocados from Mexico have not cost one single job to the domestic industry [in the United States],” said Ramon Paz, the spokesman for Michoacan’s growers.

And what better way to drive the point home than with a massive three tons of guacamole? I’m sure millennials around America are crying out in despair for having missed out on the occasion as we speak.

Related Topics:avocadoGuacamoleguinnessLargest Guacamole
Up Next

Here’s Where To Get The Best Modaks In Mumbai