You may or may not have watched Rick and Morty, but we can guarantee that you’ve heard about McDonald’s Szechuan sauce that it brought into the public eye. Szechuan sauce was released by the fast food giant as a promotion for the Disney movie Mulan for a limited time, but, thanks to Rick and Morty fans, it may be back. 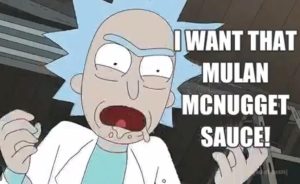 After patrons watched the Rick and Morty episode where that ‘Mulan McNugget sauce’ was referenced, McDonald’s conducted a giveaway for the last couple remaining jars of Szechuan sauce which culminated in a $15,000 buy out which DeadMau5 was involved in.

After the response McDonald’s received from Rick and Morty fans, they decided to ‘bring back Szechuan sauce for a day’. Unfortunately, it was only available at a limited number of outlets who got a limited supply of the sauce. This meant that many fans queued up for hours without ever receiving the sauce. Essentially, they stood in a queue for hours for a meal at McDonald’s (that’s pretty sad, right?)

Luckily, McDonald’s didn’t turn a deaf ear to the complaints. Along with an apology, McDonald’s vowed to bring back Szechuan sauce this winter in a greater capacity. Perhaps Rick and Morty fans will be able to wrangle them into bringing back the Mulan McNugget sauce for good. Stranger things have happened.