It was a monotonous Tuesday evening when I walked into the lobby of the Park Hotel in Chennai. Nestled in the heart of the city across the Gemini Flyover, this hotel boasts of the most equidistant location to major offices complexes, shopping malls and other places of interest. From the terrace of the Hotel, one can look straight into the American consulate building across the road – from what I heard. I didn’t do anything. Trust me.

Lotus – the signature Thai restaurant at the lobby level of the Park Hotel welcomed guests with a live satay counter as part of their street food festival. Satay is a skewered and seasoned meat dish served with a dip. Strung together on a long thin stick, once the meat is consumed the empty satay stick doubles up as a chopstick or a back scratcher. The seasoning that remains on the stick contains turmeric and cumin – known for relieving back itches. Although Satay originated in Indonesia, its conspicuous presence in a Thai street food festival points to the popularity of the dish in Thailand. Or the limited research by the culinary team in India. My female accomplice and I were ushered into a rectangular banquet hall adjacent to the satay counter, which surprisingly had elaborate sofa sets, deep soft carpets and even tables set ready for diners. I commended the staff on quickly converting a banquet hall into a dining space. I was politely informed that this was not a random banquet hall but the signature Thai restaurant LOTUS. Refusing to be immobilized by this embarrassment, I deftly changed the topic by yelling out – FIRE! FIRE!!

Half an hour later, the fire drill was called off and we were back inside the hotel building. I learnt from the Chef that some mysterious diner had set off a hoax fire alarm. Hungry from the yelling and running, I settled into the plush seating and browsed through the street food menu card. It had a spread of starters, salads, main course and deserts – a potpourri of popular dishes served from the iconic food carts in the streets of Bangkok.

I ordered the Nong Gai Sauce Kra Prao. This dish is named after an ancient Thai proverb that translates to ‘Shut up and eat the Chicken’. The panko chicken drummies served with basil cream sauce was crunchy in texture and subtle in flavor, teasing you for more. On recommendation from the lovely Chef, we also went for the Chicken Flapper Satay and Hogget Liver Satay – chicken wings and goat liver respectively. The goat liver satay (Street Name: Satae Thub) had such a soft texture, we almost forgot it was the liver. Thoroughly impressed by the starters, I waited with skepticism to see if the main course can top that.

It did. And how! We decided to go with one seafood and one meat dish. Little did I realize that ordering the Gae Toon – would become the best decision I’ve made till date in 2015. Named after the Thai homosexual cartoon superhero ‘Gae Toon’, this lamb shank dish is flavored with star anise, oyster sauce and chili. The meat was soft, juicy and tasted like a rare variant of French wine. I enquired if the leftover portions can be given as takeaway. The staff willingly obliged. But once the parceled portion was placed on the table, I opened it and ate it all up just to prove my point. That the Gae Toon was beyond compare! The Fried Murrel Fish was deep fried in a tempura like batter and layered with a dark, creamy sauce. Comfort food on any day. A surprise hit was the Thai chicken noodles served with papaya shreds and a tossing of nutty spices, to go with the main course. And then came the chicken noodles with generous portions of layered egg. I had a tough time deciding if I’m going to be a rice person or a noodles person that night. We helped ourselves to second helpings on both. 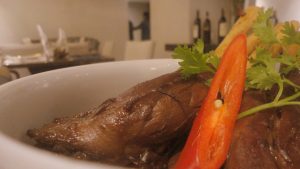 The staff teased us into sampling the desert menu – 1 portion each of Sweet Pumpkin custard, Sago Coconut Pudding and Thai Guava Ice Cream. The milk based custard tasted so reassuringly familiar that I could’ve sworn it was bought off the shelves at Krishna Sweets. The coconut pudding on the other hand tasted like an Indian sweet dish that you would get at a Malaysian outlet of Krishna Sweets. But both of them were delicious and yummy! The Guava Ice cream lived up to its name. This was a meal that came with a happy ending 😉 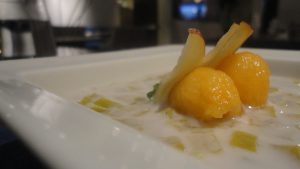 Deepu Dileepan is a standup comedian and a self-professed food critic. He checked into rehab for street food addiction in 2009 and has never checked out since. He is rumored to be a natural aphrodisiac and consumer of green leafy vegetables