It might seem like a stretch, that fresh cheese is being made in a warm city like Chennai, but put those concerns and worries aside, because this is really happening. Meet Anuradha Krishnamoorthy and Namrata Sundaresan, the masterminds behind Käse. The two have known each other for close to a decade and over a cup of coffee at Anokhi they decided to make this cheese making thing a business. Since they started Käse, things have been great for the company. They were invited to showcase their cheese at Karan Anand’s first ever Farmer’s Market in Chennai last year, where they made close to 50 kilograms of cheese for the two days and sold every single piece. Not just that, they even won an award for “Best Taste of the Market”, because their cheese is just really that good.

Anuradha and Namrata even come from two different worlds in terms of their careers and have no former education or work experience in the food industry, but that didn’t stop them. Namrata has a strategy consulting firm that specialises in international trade and investment, as well as helping Indian companies expand their business into various parts of the world. While Anuradha is a social worker who heads an initiative called CAN DO where they train and provide employment services for people with disabilities. Their friendship and obviously their common love for cheese helped bring Käse to life.

For those wondering, Käse is German for “cheese”, which is where the name comes from.With over twenty different varities of cheese, breads, dips and desserts on their menu, Käse is your one stop shop for everything cheese related.

And to get a better understanding of the brand and how it came to be, we sat down to chat with Anuradha and Namrata.

So, we do need to know why cheese?

Namrata: Cheese is something I love eating. And of course, I’m talking about good artisan cheese, even if we all grew up on processed cheese and that’s all you know. But then you travel and then you come across amazing soft cheeses and get introduced to the Camembert of the world. And you realise that you don’t get enough of that in India. Then on a holiday, I got a chance to try my hands at cheese making at Acres Wild in Coonoor, around November 2015. I was there for a good 10 days and I said ‘okay why not try my hand at cheese making and some day I’ll have a place of my own, just like this in the hills. I’ll have my bed and breakfast and I’ll have lots of cheese to make’ and that’s exactly how it started.

Anuradha has been a good friend for the last decade. And Anu runs this initiative called “Can Do” which is working with people with disabilities to make them self-sufficient with certain job skills. And we were talking about food related things that they can do and she mentioned baking and I said ‘Listen, I learned cheese making and did nothing of it, let’s start making cheese’.

We tried our hand and realised that okay, Feta turns out like Feta and Mozzarella like Mozzarella, so let’s do something about it. So we had 5 kilos of cheese made and had friends and family and laid out a nice platter – we had desserts, salads, appetisers. And then people said ‘You know, you should be doing this!’ And I think we started seriously making cheese on a daily basis and taking this initiative forward in July of last year.

During the Farmer’s Market, there was a downpour and the first day was a washout. So on the second day, we were supposed to start at 11am and when there was still no update by 1pm, we were getting worried about what would happen to the cheese. We didn’t have a chiller and we had a lot of cheese. We didn’t want to age our cheese because the concept was to make and serve fresh cheese. But with the waiting and the humidity following the rain, our cheese did start ageing and that forced us to work onto the next thing. And after that there was no looking back. And now if anyone asks, we tell them we’re cheese makers! 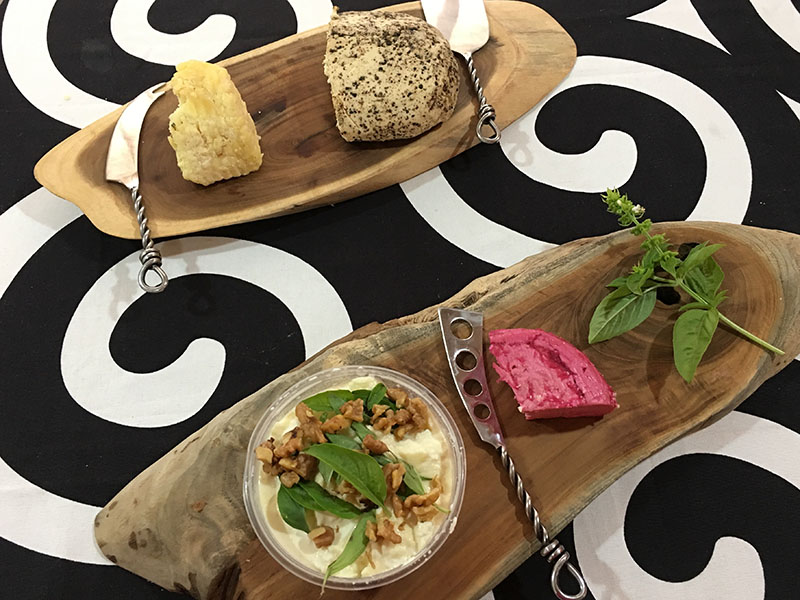 How did you come up with the name of the brand?

Namrata: It’s German and even Dutch for Cheese. And the reason being, one of the first cheese we started making was called Quark. Quark is supposed to be the next best thing after Greek Yogurt. It’s basically nicely thick cultured yoghurt kind of thing and it’s sweet in nature. You know the home made dahi? Well, the Quark is kind of like that. Quark is very German and outside of Germany and even in other parts of Europe, you don’t get Quark. And that’s kind of how the whole thing came about.

How many cheeses do you have now? And what are the different kinds?

Namrata: We do about over twenty variations or so.

Anuradha: Predominately, how you name it basically is totally it depends on the region where it comes from. So we try to do add and give a twist to our own cheese. And we’ve also been naming our cheese. You’ll find the cheese you may not find anywhere else.

Namrata: And that’s how it has to be. There’s a regional protection for cheese which was implemented a couple of years back. So basically, a Halloumi can be a Halloumi only if it comes from a certain part of Cypress. Feta is Feta only if it’s made from sheep or goat milk coming out of Greece. And the reason we would like to call it a Feta is because it’s a Feta style cheese. We do Cheddar as well. Now Cheddar in this weather comes out very different. English Cheddar is nice and hard, but Cheddar in Chennai weather becomes completely creamy and becomes something like a young Brie.

So our flagship product, if I may call it that, is something called a Pickled Feta, which is slightly aged and then chopped, added to olive oil, garlic and thyme. And then recently we had another innovation which is the Ruby Feta or pink feta as a lot of people call it. It’s blushed with beetroot and infused with roasted garlic. Even we have become a little addicted.

What’s special about the Käse Cheese?

Anuradha: As a culture, we use a lot of milk products, but cheese is a not as popular. It’s more of an acquired taste, especially when you’re talking about cheese that is aged. Unless you have a taste for it, the reactions are very varied. I would say that we have arrived at a good time to start with because people are able to appreciate when they visit places and have a taste of cheese and what we get here. And now people are willing to try out new things and experiment. So that way it’s very good for us to be in the market. And also the fact that we go to greater lengths to make sure that ours is a very clean product.

Namrata: True. Apart from sea salt, we don’t use any other preserving agent. Typically the cheese that you’ll buy in the market, will have up to 75% added fat just to keep the cheese stable. And then there’s something called a stabiliser which is mostly fat and emulsifiers, which is also fat and then there are preservatives which are chemical in nature. Otherwise, you will not have a shelf life. And given the kind of weather we have, it’s very very difficult to preserve it.

What we have is a very artisanal and completely clean product. There are absolutely no chemicals that go into it. Cheese is the biggest source of vegetarian protein and it’s got 84 different kinds of nutrients, unlike what people assume cheese has. It’s high on protein and low on fat. Because when you make the cheese, the fat gets left behind in the whey. For us, we don’t look at this just as a cheese making venture, we look at it as a product that can be added into your daily diet, it’s a clean product that people can enjoy. there’s a lot of awareness creating and which is what we do through our events.

Also, our cheese is made from raw milk cheese. Initially, we pasteurised a few things, but then we realised that it’s not necessary. You can use raw milk when you’re absolutely sure about a good source. Another thing is that we do a plant rennet, not an animal rennet, that makes all our cheese vegetarian.

How does the weather impact cheesemaking in Chennai?

Namrata: For example when you make Feta in a colder region, it doesn’t aerate so much. Here, because of the weather, the cheese starts to aerate very quickly and develops larger pores. There’s a lot more on the technical side of things, and those who know and understand cheese would ask questions like ‘why is the feta so hollow?’ or ‘why is your feta so dense?’ or ‘why does it have the tartness?’. Those are things that are caused by the weather and something beyond our control. So we do try AC rooms, dehumidifier, fridges, but it has to come in contact with the environment eventually. Like the Cheddar, you can’t have it hard, because it will end up melting and become creamy. The texture is very different. It’s very easy to get a Camembert or a Brie kind of cheese because it’s all gooey and soft when you eat it. 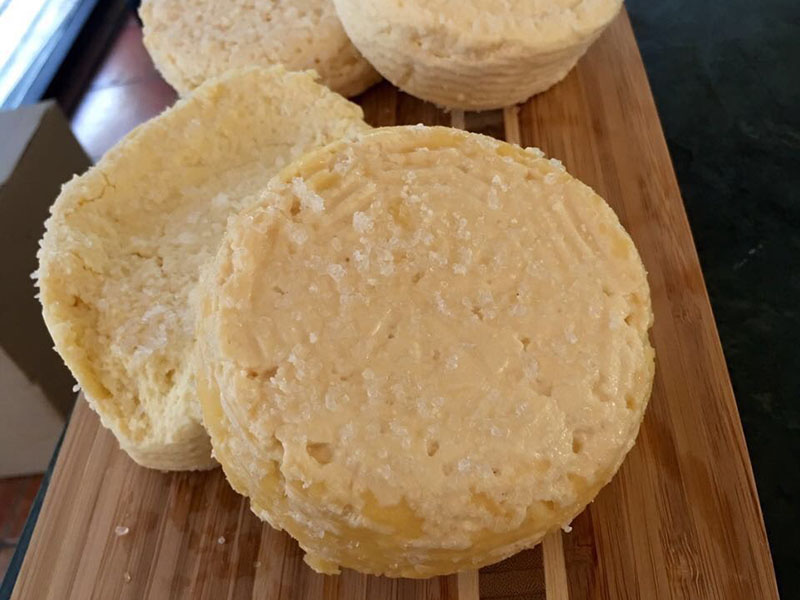 Tell me about the cheese clubs.

Namrata: it’s not kicked off yet, but we do these events fairly often at least once a month. The cheese club would basically have events, a subscription box and you can sign up for a certain period and then get cheese packaged and delivered every month. We’d also be doing pairing events and other events as well, so as a member, you’d get invited and you’d get priority to come for those events.

Anuradha: The idea is also to create an awareness. There have been different kinds of reaction to the cheese, at some events, people will come and discuss at length about how we do it and all the health benefits and all that. And on the other end of the spectrum, you’d have people who would still think of cheese as “fattening”. So the idea is primarily to promote it as a good option. Especially because we tell them it’s a clean product.

Namrata: Cooking demonstrations are another part of the cheese club.

Finally, what is your favourite cheese on your menu?

You can purchase cheese from Käse via their website or calling them at 091762 21898. All pictures credit Käse.

10 Casseroles For A Kicking Week

Staple Pins In Food Packaging To Be Banned By The FDA.