Musician and well-known social media goof, John Mayer recently had an Oreo overdose and probably won’t be eating the sandwich cookies for some time now.

Mayer took to Instagram to show the world how Oreo Minis are really meant to be eaten. Not. In an epic snack recreation, the Stop This Train singer instead of dunking, immersed a whole bunch of them in a bowl of almond milk to eat the cookie like cereal. Six packets of mini Oreos to be exact.

“We start working out Tuesday,” Mayer wrote, sharing an image of his bowl that looked straight out of Oreo heaven. “Until then we burn this mother***er down.” 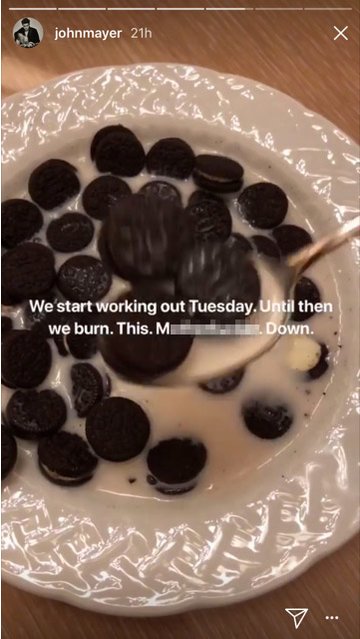 Now, we have to admit, it seemed like a great idea, eating mini Oreos as crunchy cereal. And we would be lying if our palate too didn’t do a little dance at the sight of so many Oreo cookies in one big bowl of milk. That was until Mayer posted this: “NOTICE I have an upset stomach. Yes, I know it’s from the mini Oreos. I’ve learned a lot from putting cookies in milk. I learned that just because it fits in a bowl and soaks up milk doesn’t mean it’s good to eat it.” And that is a lot coming from someone who can ingest dog food. 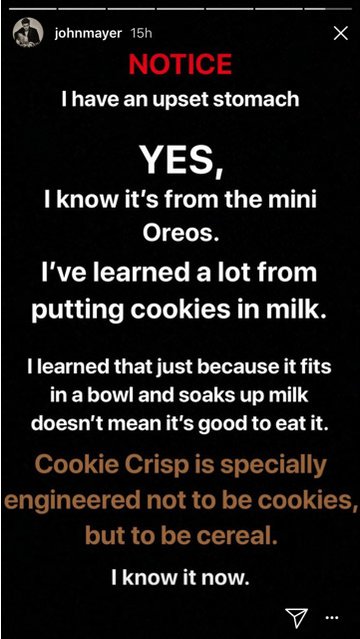 It turns out there is a reason NABISCO wants us to “Twist, Lick, Dunk”. And John Mayer is now living example of what happens if you don’t. “Cookie Crisp is specially engineered not to be cookies, but to be cereal. I know it now”, he later wrote in retrospect.