The Wine Train tour of the Napa Valley has gained popularity (thanks in part to Sheldon’s love of trains). A few months ago they had an extra special Tequila Train for the occasion of Cinco de Mayo. Now, they’re changing things up with a new Hop Train!

Starting from June 18th, every Monday the Napa Palisades Beer Company is going to be doling out brews for this hoppy train. For two hours you get to see the sights of the Valley through an open carriage while sipping on some select brews and munchies on delicious snacks. 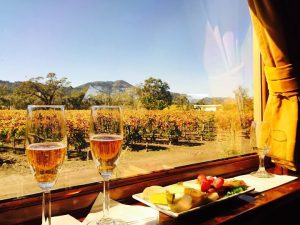 According to Delish, here’s what’s on the menu: the 1849 Gold Rush Red, which tastes like caramel and smoke; the Little Loco Session IPA, which hits you with a note of pine on the finish; and the Loco IPA, which is citrus-forward and the booziest of the bunch.

So if you’re planning on heading to California for a vacation, then you can get on the Hop Train at only $75 per head ($50 if you’re from the area) for a hoppy, boozy ride!