Hershey’s just went to another level to ensure its customers have the best in chocolate goodiness. They have entered the space of 3D printing. 3D printing chocolate to be precise. Yes, that’s right a Do-It-Yourself Chocolate printer that allows you to print any shape of candy that you like.

The chocolate giant is taking its CocoJet 3D printer from 3D Systems to different exhibits throughout the U.S. to show chocolate lovers how this futuristic candy machine creates uniquely delicious designs. Customers can interact with the machine via an Ipad and get the machine to form a number of chocolate designs – including complicated hexagons and intricately laced patterns. The CocoJet works on open-source patterns so it’s possible to upload your own design to the CocoJet, too. 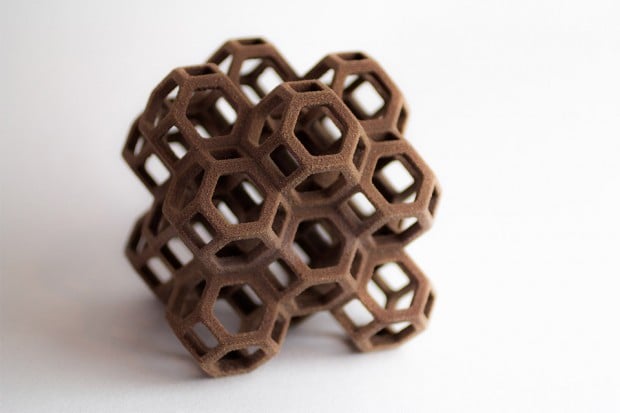 “We are now using 3-D technology to bring Hershey goodness to consumers in unanticipated and exciting ways,” said Will Papa, Chief Research and Development Officer, The Hershey Company. “3-D printing gives consumers nearly endless possibilities for personalizing their chocolate, and our exhibit will be their first chance to see 3-D chocolate candy printing in action.”

According to Hershey’s tech marketing exec Jeff Mundt, it’s a bit more complicated to get a figurine, but you could theoretically make yourself or a friend into a chocolate replica.

There are other chocolate-centric 3D printers out there. The Choc Edge is one that will also customize chocolate designs. Some 3D food printers can also take on the silky smooth texture of chocolate. However, Hershey’s believes its CocoJet is the most technologically advanced chocolate 3D printer in operation.

“We can print anything that you could print with a plastic printer in chocolate. It looks very similar to a standard 3D Systems printer but it’s heavily modified,” Mundt told TechCrunch.

Check out the video of the printer in action below.

Prada Turns Delicious and Opens Up a Pastry Shop in Milan

Get Sizzling: A New Dating App From Oscar Mayer Finds You Partners Based On Bacon Preferences!