Most of us must’ve experienced a bitter taste of raw onions though we bought good ones from the market and the fact that they don’t look rotten. Then what’s the reason behind it? ACS’ Journal of Agricultural and Food Chemistry has finally identified several compounds that develop when a raw onion is cut that seem to be causing the smell.

Why Onions Makes You Cry

Earlier researches have shown that onions release lachrymatory which is a compound when it is cut open. This compound is the culprit for watery eyes of the person cutting an onion. Along with this compound the scientists have also found that many sulfur-based compounds also form in the onion after it is cut up though these weren’t the cause of the bitterness. Which is when Roman Kubec and his colleagues took up the task of identifying them.

The Bitterness In Onions 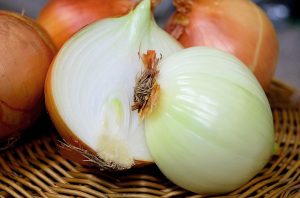 To figure out which compounds caused the bitterness in onions, the team began by processing the onions in a juicer. They found that the fresh juice wasn’t bitter, but kept aside for half an hour, it developed a strong, bitter taste. After this occurrence, a sensory-guided high-performance liquid chromatography was performed to find out the compounds that had formed in the onion juice in the half an hour. They found nine groups of sulfur compounds in the juice which the researchers called as allithiolanes. These allithiolanes seem to form spontaneously when onions are damaged, cut or juiced. These were also identified in leeks and a group was found in garlic as well.

We simply think that cutting onions only when you want to consume it immediately can be your safest bet. Even keeping chopped onion in some water has worked out for us so you can try that too.

Protect Yourself From Harmful Inflammation By Eating Strawberries