In continuation to their ‘Food Mein Dalo Magic’ campaign, which encourages consumers to make everyday food magical, Dr. Oetker’s FunFoods recently launched its range of “Zer0Fat Dressings” that promise the same taste minus the calories.

The range was unveiled to consumers through an influencer campaign on social media. A number of movie stars and celebrity chefs like Ranveer Brar shared recipes and their review of the product online. Picking up on the buzz, the FMCG giant has now released a video campaign featuring actors Sonali Bendre and Amyra Dastur.

Commenting on the marketing campaign, Oliver Mirza, Managing Director & CEO, Dr. Oetker India said, “As a leader in Western Sauces & Spreads category, it is our endeavor to constantly innovate and offer consumers convenient ways to create yummy food. The new range of dressings delivers exactly that with an added benefit of being Zer0Fat. We are excited to launch a marketing campaign to grow the dressings’ category, which motivates consumers to enjoy delicious food, guilt-free. We are confident that the campaign will attract new users into the category and become a catalyst to realize FunFoods’ vision of INR 500 crore by 2020.” 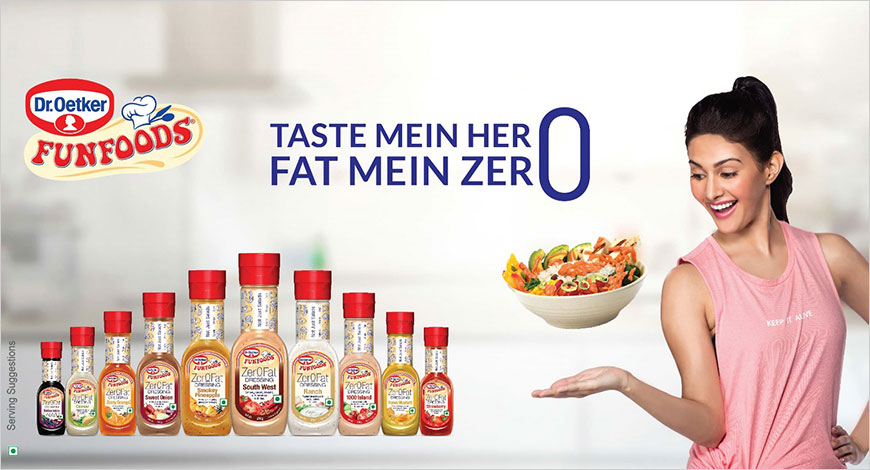 The campaign highlights the lightness and taste of the product “through a playful story between Sonali and her on-screen sis-in-law Amyra. We believe that the campaign works hard to recruit new consumers to the category as it has been designed to bust consumer barriers and establish the key product attribute – Zer0Fat”, stated Devarshy R. Ganguly, Vice President- Marketing, Dr. Oetker India said.

Created by advertising agency Scarecrow M&C Saatchi and produced by Light Bulb Motion Pictures, the video ad is part of a “360 degree marketing campaign, which attempts to connect and engage with consumers across multiple touch points like digital, TV, print, OOH and point-of-sale”, added Ganguly.

Bendre, who is currently undergoing treatment for cancer in the United States, has long been associated with FunFoods. The actor has previously been seen endorsing the brand’s products like vegetarian mayonnaise. Watch the video ad featuring the new Zero Fat range below.

Iceland President Won’t Take Any Of Your Pineapple Pizza Drama!

This Is Why Kendall Jenner Can Never Eat Pancakes