“We wanted to ditch the mundane and meaningless pre-wedding shoot and do something we relate to,” said Vishakha Prasad, the bride in an e-mail interview with the Hindustan Times. Vishakha who is an advertising professional is all set to marry her soulmate Vinit Mehra who is a businessman. While Vinit has a passion for photography, the Mumbai couple share a passion too, of being foodies.

When Foodies Get Hitched 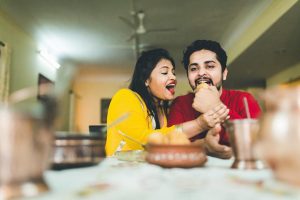 The couple who are together since October 2016 decided to hitched on 21st this month and to break the conventional pre-wedding shoot ideology. Where other couple look for scenic sights, these two asked Samsara Photography to shoot them at their favourite restaurants in Mumbai including the one in which they had their first date reports the Hindustan Times. 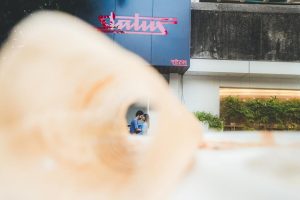 “We captured food we love – pedestrian and fancy. From my mom’s litti chokha to Gustoso’s pizza in Mumbai, from Status’ dosa to paan from Muchhad Paanwala… We included our favourite Dev momos, sea food from Mahesh lunch homes and even last-minute Swiggy deliveries,” said Vishakha in her interview with the publication. This unique idea struck Vinit and his would-be wife who was being advised to lose weight gave a big nod to her fiancé. “Everyone was nagging me to diet so we decided to go on a food riot,” said Vishakha. That’s the spirit we say! 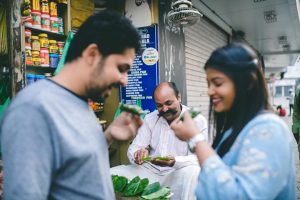 The pre-wedding photoshoot of Vishakha and Vinit included their favourite coffee place Starbucks and their go-to donut place – Mad Over Donuts. The Hinsutan Times further reports that the shoot even captured the couple at Sweetish House Mafia which they turned to for their midnight cravings along with their weekly trips to Nature’s Basket. The street food was given equal attention with the couple posing in front of a Tandoori Chicken shop at Mohammed Ali Road and with the groom giving the bride a bouquet of French Fries.