A true Gilmore Girls fan will know that food is a huge part of the show. Not necessarily because they’re always eating and drinking, but because they’re always talking about it. Rory and Lorelai Gilmore love their food and nothing and no one can ever take that away from them. Plus, Lorelai’s best friend is Sookie and she’s one hell of a cook. Food is such a big part of the show that there’s even a cook book featuring recipes from the show, there’s also ice cream named and inspired by the show and now, there’s also coffee inspired by Luke’s Diner.

For those that don’t know anything about the show, you have five days to binge-watch seven seasons before the revival arrives on Netflix and then after that, the following weekend is totally sorted. But before we get there, here’s what you need to plan, save and stock up for, because if you don’t have these essentials, then you’re not doing this Gilmore Girls revival the right way.

“It’s a religion”, that’s exactly what Lorelai says about pizza, because it’s not just food to her and we totally agree. Pizza is a winning meal and the more you have it, the better. And we’re pretty sure that pairing pizza and coffee would make Lorelai the happiest person alive.

Nothing will stop the Girls from enjoying everything the world of cakes has to offer, including going cake tasting when someone is already making them a cake. Even if Lorelai and Max don’t end up being together, cake tasting is clearly the best part of that whole almost-wedding. 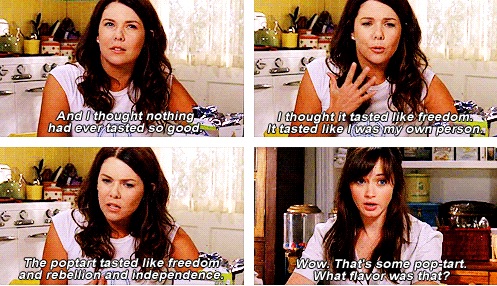 If you’ve watched the trailer for the revival as many times as we have, then you’ll know that the girls are still munching away on PopTarts like their lives depend on it. It’s a great breakfast and like everything else the Gilmore love, it also solves every single problem in the world.

Maybe it’s an American thing to love pie so much, but let’s be honest though, pie is definitely a dessert that can bring a smile to your face. It’s delicious and it comes in different flavours, much like a Pop Tart. Maybe there’s a common thread running through all these food items….

You know what’s great about tacos? They’re crunchy and juicy and filled with everything good. And in one bite you can get the best things that life has to offer. Plus, it’s great hangover food and sometimes after one too many wild nights, that’s all you really need.

There are tons more food items that the Gilmores stuff their faces with, but if you’ve got a large supply of these, then you’re set for the whole weekend. Remember, binge-watch, not binge-eat!

#ChennaiRoundUp: A Food-Filled Week Awaits You In The City

#BengaluruRoundUp: For The Love Of Good Food, Chocolate And Beverages This Weekend