Lots of people believe that the three terms mean the same thing, but they don’t. They can work together to define a type of food, but you can interchange them as and how you please. For years, fast food and junk food as been one and the same and it’s time that we understand that they are similar, but not identical. It’s important to keep in mind that while they all very often fall under the ‘unhealthy’ category, that’s also not entirely true.

As a kid, I was told that fast food was bad for me. Then as I got older, I was told the same thing about junk food. And when I was finally in college, street food was the devil. I was still under the impression that all three things pointed in the same direction, because if they’re all bad for me, then they must all be the same thing, right? Wrong. It took me a while to really wrap my head around what the differences were, I get it now. One is better than the other, one is awful for everyone and one is not necessarily good or bad, but it’s still damn delicious.

Let me break it down for you.

Fast food is, essentially, quick and convenient food that is easily accessible and requires very little preparation and is also affordable for almost anyone. Usually, you purchase it from a fast food restaurant chain either at the counter or at the drive-thru. Think McDonald’s and Burger King and KFC.

You’re probably thinking that these are unhealthy foods and you are absolutely correct. When fast food companies were first introduced into the market, they spent lots of money to target teenagers and young children of low economic status to get access to inexpensive food. If you came from a large family where there wasn’t enough time to prepare a full meal, this was how you satisfied your hunger pangs. They are unhealthy because of the bad fats, cholesterol, sodium, refined sugars and millions of calories. But it’s fast and it’s inexpensive.

Over the years, these fast food chains have been adding healthier options to the menu making it fast, but healthy. So salads, fruit juices, fruit salads and other healthy options to choose from. And if that’s not enough, they also offer grilling and broiling as opposed to frying and loading your food up with all the fat that you should be avoiding.

What classifies as fast food? Your pizzas and hamburgers, French fries, fried chicken, donuts, and the like.

Much like fast food, junk food is also quick and easily accessible and cheap. But what differentiates junk food from fast food is that it consists mainly of what is known as “empty calories” because there is either no nutritional content or it is so low, it might as well not even exist. And you can get these kind of foods anywhere that food is sold.

Junk food targets people, in general. Great packaging, celebrity endorsements and bright colours that will draw you in from the moment you set foot in the store. Junk food is more of a snack than a meal, because it’s not really a large portion of anything. Think of the food you can buy in a bag and that’s exactly what junk food is. High in trans and saturated fats, sugars and sodium, it’s also filled to the brim with calories and preservatives to give it a longer shelf life and let’s not even get started on the artificial ingredients.

All the stuff that you think is great for a party goes under junk food. Popcorn, potato chips, Dorito’s, pretzels, prepackaged cookies, candy and even your fizzy drinks. 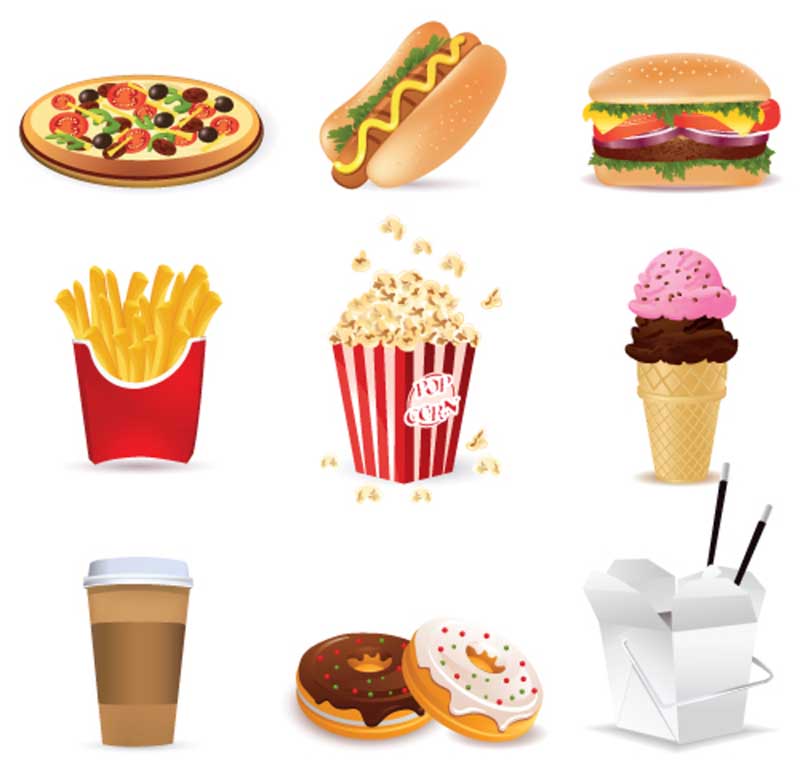 As I said before, they’re all quick and easily accessible and cheap. And street food is just the same. Usually bought off of a cart or a food truck, it’s sort of like a pop-up restaurant because it could be there one day and gone tomorrow. It’s usually made fresh, right in front of you, or made of ingredients that were pre-mixed and cut and then put together in front of you.

A lot of people will say that street food is the healthier choice and that’s not entirely wrong. While it can be unhealthy because of the high oil content and the fact that the same oil has been used all day and for various different dishes, it is also healthier than the other two options. Street food is typically made by people from low income families who can cook really well, but can’t seem to find the perfect place to sell their skills.

In different parts of the world, street food is made and served differently, some cleaner than others, but the food always tastes delicious and retains the authentic local flavour. In India, especially, the street food might taste great, but the environment in where it’s made is what can prove to be unhealthy and even unsafe.

The Moral of the story

Don’t overdo it with fast food, junk food or street food, you need to be able to control your intake because saturated and trans fats are what causes most of the health problems in the world. Choose healthier options over the easy ones and remember that just because something is easy, doesn’t mean it’s good for you.

The Rise and Fall of Food-Delivery Services

Obesity, Processed Meats and Alcohol Can Put You at a Higher Risk of Stomach Cancer