January has never seemed so long, and we’re eagerly awaiting the nearest holiday in sight. With the first long weekend of this new year coming up on this Republic Day, start it right with the Thursday Live Performance at Hard Rock Cafe, Bangalore by the renowned Masala Coffee.

ICYMI (in case you missed it), Masala Coffee is a Kerala-based music band formed in 2014. They became famous through music videos on the popular music show Music Mojo on Kappa TV. The band forays in the genres of Indian folk, pop, and rock. They have covered popular songs in Malayalam, Hindi and Tamil. They have also composed music for the Tamil movie Uriyadi. 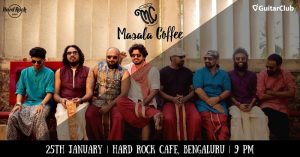 If you’re in it for both the food and the music, in addition to the delicious array of dishes we’ve come to know and love, Hard Rock also has a spanking new menu with a bowl festival called the Rock’ N Bowls going on. So, we’re saying that your options are limitless because of course, you can add on some brilliant cocktails (or draught beer, if you’re basic like that) to keep your spirits high.

Celebrate Navratri With Some Delicious Dishes From PurpleBasil