Pardon me while I gag my insides out! Who even comes up with such bizarre ideas?! A pimple cupcake? As if acnes wasn’t enough of a nightmare in high school, this California Bakery is making sure we relive the nasty horror of popping pimples!

Known as Blessed By Baking, the bakery has created cupcakes that look like a pimple. And as if a horrid red pimple made of fondant wasn’t enough, the bakery has even topped it off with a yellow custard to represent you-know-what. Oh and, they are totally squeezable. You can pop the friggin’ cupcake pimples! 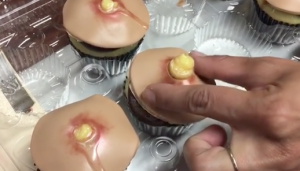 The Pimple Cupcakes have been custom designed for Dr. Sandra Lee a.k.a. Dr. Pimple Popper whose Insta feed is a gore fest of pictures and videos that feature vivid snippets from her work as a dermatologist. And the mind-bending part is that close to 1.6million people follow the doctor BY THEIR OWN WILL.

Sigh! What a time to be alive.

So what do you think about the graphically monstrous bake? Would you eat it? Vote and let us know!

Krispy Kreme Launches Donut-Flavored Soda. Because, Why Not