Drew Barrymore is a doll and the most violent we’ve ever seen her is as one of Charlie’s Angels, so imagining her as an undead person who lives off human flesh was a little more than unbelievable. That was until we saw this hilariously gruesome trailer of the Netflix Original Series Santa Clarita Diet.

Not so doll-like anymore is she?

But anyone who has stalked Barrymore enough on the Internet would know that the actress is vegetarian. Which means she’s obviously NOT eating meat. Not even animal meat, let alone human flesh! So what IS the woman chowing down on throughout the series?

Hannibal Would Be Proud

Special effects makeup master Christien Tinsley came up with a bunch of ingenious solutions to make whole cannibalism thing look real. He told the NY Post ‘There were so many things you couldn’t use. I would have said let’s get some raw tuna, sushi-grade, and bloody it up and make life easy and it didn’t work that way. We ended up defaulting to gummy bear formula.

‘It’s gelatinous, it’s translucent, we can cast it into food-grade molds we created to look like meat and visceral tendon, and we could paint them with food dyes.’ Funny how our soul is still shuddering at that completely vegetarian description.

But what about those thick repulsive crimson “protein” shakes that Sheila is seen guzzling throughout the day? Turns out that’s just a harmless – and uber nutritious – blend of bananas and beetroots. Oh. 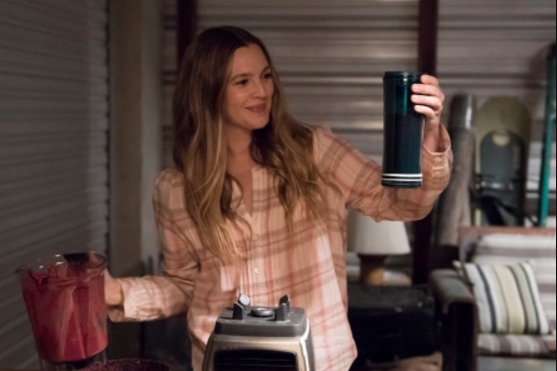 How Did A Vegetarian Do It?

Moreover, she contributed a lot towards making her character look like a really messy and blood-thirst Cannibal. ‘She would actually grab the bottle of blood and squeeze it into her mouth, pour it onto her chin and let it drip down onto her clothes… I think she was having a good time not being Drew in the other movies that we’ve seen her in”, he added.

‘She was Drew the cannibal and I think she was having fun with that.’