The internet has been having a bit of fun lately with Donald Trump. After a few bumps in the road following the Democratic Convention, Trump appears to be trying to win some public appeal through a photo of himself eating KFC. After all, he’s just like the regular folks, right? 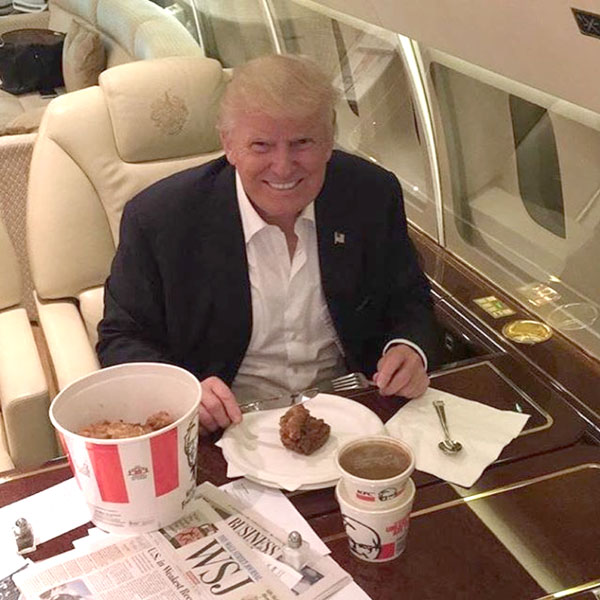 But, wait, look a little closer. Is he actually eating KFC with a knife and fork? A knife and fork that appear to be sterling silver? Oh, no. As any regular person would tell him, that’s no way to enjoy the juicy deliciousness that is Kentucky Fried Chicken. You have to dig in, feel the texture of the chicken and make a complete mess. But that may have ruined his suit.

As expected, the Twitterati were quick to mock the photo. One wonders why there’s a tumbler of salt near his plate:

Donald Trump is the only person in America that thinks KFC is lacking in sodium pic.twitter.com/Qd5IMvQHQ6

Another wonders whether Trump may be the next representative for Colonel Sanders:

What if this whole election is just a buildup to @KFC announcing Donald Trump as the new Colonel on November 8th. pic.twitter.com/WvONSDO28G

Someone else took the opportunity to explain why he was using a knife and fork:

Trump eats KFC with a knife and fork because he can't hold the chicken with his tiny hands pic.twitter.com/UgN0vD1PyA

His hands do look a little small in this picture, don’t they? Perhaps its because of the private jet background. A regular person? Not so much.

#WeeklyRoundUp: All The Food Stories You Might Have Missed This Week