Health conscious eaters or people who are looking for foods that are devoid of harmful chemicals and GMO often have a tough time at markets because it’s not exactly easy to distinguish GMO and chemical-free goods from the entire lot. However, a new regulation introduced by India’s apex food safety regulator, Food Safety and Standards Authority of India (FSSAI), may soon change that.

FSSAI has made it compulsory for all food manufacturers to display a red color coding on front-of-the-pack labels borne by packaged food products that are high in fat, sugar or salt levels. Currently food packets – or boxes – carry a general table containing all the nutritional information like calories, total fat, trans-fat, total sugar and salt per serving, but with the new regulation in effect, for products that will contain high levels of fat, salt and sugar, the percentages of dietary energy values will be highlighted in red on the labels. Though a first for India, this is a common practice in many countries. 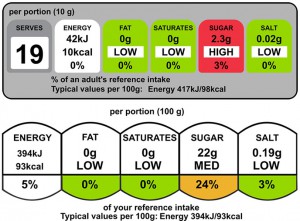 Additionally, the food safety and standards controller has also suggested that all food products that have 5 percent or more of ingredients that are genetically engineered or modified (GMO) should carry a clear declaration stating the same.

The proposed draft Food Safety and Standards (Labelling and Display) Regulations, 2018 are now in the public domain for suggestions and feedback before they are notified, reports The New Indian Express. What do you think, will this move make selecting foods at markets easier for us or will it have no major effect? Let us know what you think in the comments below.

Would You Try This Tarantula Burger Challenge?

Students Pay Up: Food & Drinks In Educational Institutions To Have 5% GST Added