When you think about taste, you automatically think of the taste buds and the flavours that taste. We  don’t think about all the other factors that are influencing why we like certain foods and why we don’t like others.

Turns out, one of the least important elements in the way food tastes may be the food itself.

In his fascinating new book, “Gastrophysics: The New Science of Eating,”Charles  Spence explores the powerful hold our brains have over our taste buds.

“I think in a way we’re all skeptical,” Spence tells The Post. “No matter how many graphs and experiments I show someone, they’ll think, ‘I know I can taste what’s in the glass and on the plate, and it doesn’t make sense that the [restaurant’s] music and the paint color are changing the taste.’”

Spence uses a variety of methods in his exploration of the food world. In an experiment, 200 volunteers munched on Pringles potato crisps while listening to various sounds in headphones. It was discovered that the snack seemed fresher  to the participants when accompanied by a loud crunching sound.

In another test, he and British modernist chef Heston Blumenthal served two sets of identical oysters: one in seashells accompanied by sounds of the seaside and a second in a petri dish accompanied by barnyard noises. The first group was rated 30 percent saltier.

Spence has consulted with chefs around the world on how to alter a dining experience, and he also works with large companies to improve a buyer’s perception of packaged foods. For example, changing the packaging’s colors or typeface can alter the perception of the contents inside, leading us to believe it tastes sweeter or more sour. Or sealing potato chips in a particularly crinkly-sounding bag can make the chips taste crispier.

Here are the 12 ways the brain could be playing tricks on you while you eat out, according to the studies : 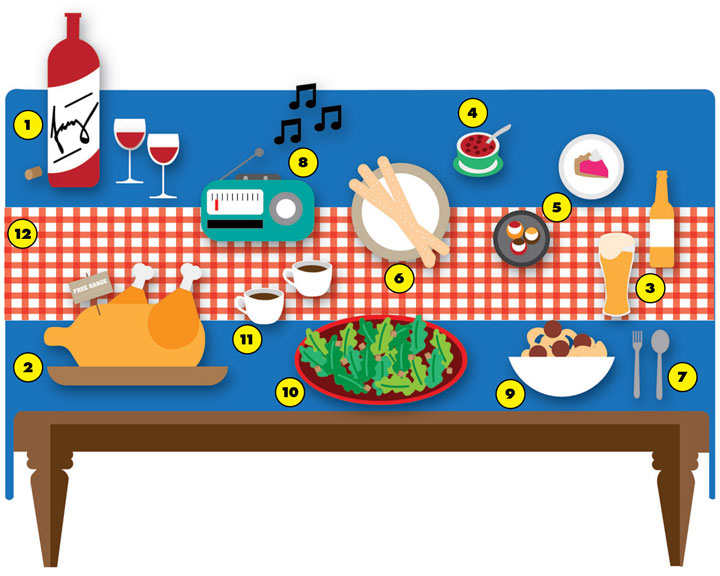 1. Go for a pricey bottle. Research shows that vino drinkers reported enjoying a wine more when told it was expensive.

2. Watch those menu adjectives! In one experiment, meat described as “free-range” was rated tastier than an identical hunk termed “factory-farmed.”

3. Smell is crucial to taste, and someone drinking beer straight from a bottle will miss out on flavor.

4. Wondering why many desserts are circular? It’s because round food is perceived to taste sweeter.

5. A dessert served on a white plate was rated 10 to 15 percent sweeter than one on a black.

6. How the food is oriented on the plate matters. Angles should be pointing away from the diner and long, thin ingredients should stretch from the bottom left to the top right.

7. Cutlery is crucial. The heavier the spoons and forks, the higher the diners rated the food and the more they were willing to pay for it.

8. Music has a huge effect on dining habits, with eaters rating pizza and pasta better while listening to Italian opera. (Justin Bieber’s “Baby” was one particular song that turned diners’ stomachs.)

9. Perhaps revealing a preference for familiar things, diners slightly prefer foods that start with the same letters as their name. Charles likes chili.

10. Crunchy foods are crucial to enjoyment: Chefs often add crispy elements, such as toasted seeds over soggy salads or croutons to soups.

11. Coffee tastes twice as intense when drunk from a white mug.

Related Topics:Flavoursfood articlefood newsscience
Up Next