In my opinion, nothing good can come from messing with a good thing, but messing with two good things? That’s an entirely different story. However, that’s exactly what the Chinese are going to experience thanks to Alex Cree’s epiphany to combine baozi, a Chinese steamed bun, and pizza (we all know what that is) and turn it into baozza.

The boazza would essentially consist of a baozi, but stuffed with cheese, tomato (tomato on pizza?) and other pizza toppings.

Cree, an American consultant, came up with this brilliant idea while on a trip with clients in southern China. They were talking about the idea of maybe combining bao with more traditional American flavors like a burger and different things and somebody hit upon ‘pizza baozi’. He said ‘bao-zza!’and that’s just how fast history can be made. 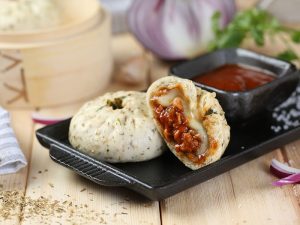 After returning home to the States Cree was so convinced that there was something there that he experimented with recipes. He later quit his job and moved to China in 2016 to set up shop in the basement of a Beijing shopping mall.

Baozza comes in four flavors – Margherita, Meat Lover, BBQ Chicken, and Hawaiian Jalapeno. The price for two buns is 20 yuan ($2.90). At a recent publicity event, the reception was pretty positive, as many Chinese people had never experienced eating a baozi like that, with all the chewiness of melted cheese and the Italian spices.

However, vendors of baozi were not convinced that people would abandon the traditional fillings of pork and onion, fried liver or vegetables.

The shocking part is that it’s definitely not the worst food idea that’s come out of the United States. We’re talking about the country that put fried chicken and waffles together and donuts with eggs. We humbly ask, please don’t mess with any more good things. Just stick to your lane and keep putting a pizza on a pizza as a pizza topping.

Related Topics:BaoziBaozzafood news
Up Next

Hershey’s Is Releasing A New “Gold” Flavour For The Olympics