We’re nearing the end of November, and we’d be lying if we didn’t say that Christmas is definitely on our minds. From the presents to the delicious cakes and pastries, there’s so much to love about the festive season! We were lucky enough to be invited to the cake-mixing ceremony at the Plaza Premium Lounge and we were super stoked to get into the Christmas spirit (also, road trip)!

After collecting our specially made day passes (I’m telling you, there’s no better feeling than getting into the airport without tickets) we traversed through the airport on our way to our final destination (the lounge, FD fans, don’t go to a dark place). 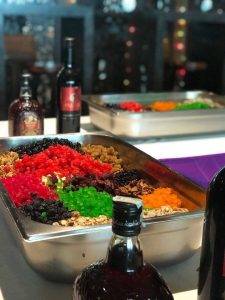 We were greeted at Plaza Premium Lounge with a glass of wine (the best way to be greeted) and a cake mixing setup which included various dried fruits, tutti frutti, and copious amounts of alcohol (the secret behind a great plum cake).

Chef Ankit Mangla, Executive Chef for Plaza Premium Lounge India, explained that the alcohol and spices would sit for at least a month after the mixing in order to absorb the best flavor possible and made an exciting announcement about hidden coins in the mix – whoever found the most coins would have a prize in store for them, which definitely elevated the mood. 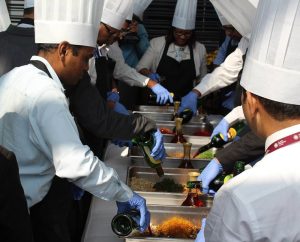 Finally, we were all set to go, and a mad scramble ensued as food bloggers, chefs, and airline representatives alike rushed to find the loot (which also served the purpose of combining the cake mix thoroughly). 100 coins, 16 bottles of alcohol, and 8 cake mix trays later the mixing was finished with the winner coming out with 22 coins (I’ll admit, I was jealous). 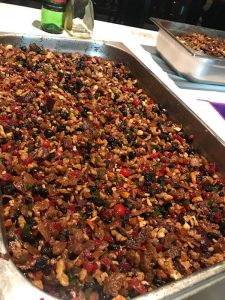 Afterwards, we were treated to a delicious lunch comprising of Italian and South Indian live stations, a salad counter, main course options and a dessert counter which included a scrumptious pumpkin pie.

Meghali was a delightful host as she took us on a tour of the lounge, from the VIP section, to the bar (which makes traveling so much better) to the spa and showers, which boasted of everything a weary traveler could desire in order to make their wait as pleasant as possible.

Unfortunately, we had to make our way back to the city after a day of fun, food, and great company, and we can’t wait for the next event to visit again. Who said a trip to the airport doesn’t make for a great day?

The Brew and Barbeque Is Reimagined Over A 22,000 sq ft Space