Indian Food Observance Days initiated by Rushina Munshaw Ghildiyal has come to a successful completion of one year with Sabzi Tarkari Din. Now on 22nd April, Aam Achaar Day is to be celebrated the second time in India. It’s being further expanded into Achaar Day as Ghildiyal was informed by many that mango pickles are limiting.

“We realized that no cuisine in the world can equal the repertoire of pickles Indian cuisine boasts! Then, one day, we visited local supermarkets to see what pickles were available on shelves. It was shocking! The offerings were so meager, just a handful of commercially packaged mango, lime and chilli pickles occupied spaces that just a couple of years ago, were brimming with all kinds of wonderful regional pickles,” said Ghildiyal according to a press release. 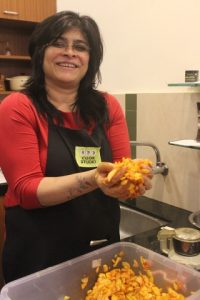 “Indian pickles are as artisanal as food can get,” said Saee, a friend of Ghildiyal. “Indian Pickles certainly fit the bill! In fact let me give you an example of myself, my paternal grandmother, was legendary for making upwards of 90 pickles annually. I inherited only a handful of her recipes. And my maternal great-grandmother is said to have been a legendary pickle maker, but I only have descriptions of the truly unusual pickles she is said to have made! I can only lament over what is lost in these cases, but, that said I do believe that we can all work to ensure we avoid more losses like this. It really is up to us to carry our legacies forward,” says Ghildiyal.

Ghildiyal encourages people to celebrate this day in many ways like documenting family recipes, making pickles using these age-old recipes, have a pickle session with the family and even friends. For those who don’t want to make achaar, she encourages them to share achaar memories, pictures, favourite achaars, having a pickle potluck and sharing them on social media. This year since #AamAchaarDay has been extended to #AchaarDay there are two hashtags one can use.

All Canteens At Govt Institutions To Get Mandatory Licenses