If not for its majestic beaches and serene landscape, Mangalore is definitely known for its food. Be it neer dosa, sannas or the well known ghee roast, the thought of mangalore cuisine is enough to make one start drooling! Here’s a reason for all Mangalorean cuisin enthusiats to rejoice – Jamavar, The Leela Palace, Bangalore, is hosting a Mangalorean food festival. So head over to indulge in Mangalorean delicacies upto the 21st of September. 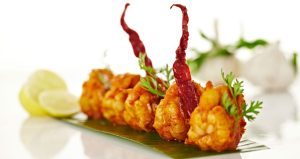 From traditional treats like chatte ambode and ghee roast to dal thove, kadubu and traditional desserts, there is something for everyone! The festival features a range of vegetarian and non-vegetarian cuisine reflecting by and large the tastes of the Madhwa community on the one hand and the Bunt community on the other. Mangalore food is incomplete without fish and prawn, so expect a few seafood delicacies as well!

Where: Jamavar – The Leela Palace, Bangalore

Related Topics:Cuisinediningfood news
Up Next

From Dough To Your Plate: It’s All About the Flying Roti When it Comes To Barottas

The Fine Line Between Fine Dining and Fine Clothing