Sushi in India is horribly expensive. That’s a fact that I’ve grudgingly come to accept after many tantrums and moan-fests. Oh, how I long to live in Japan, or Singapore or even New York where sushi is priced the same as regular food. But, since I live in India, I’ve learnt to make the best of my sushi eating experience. If you’re splurging on a nice Japanese dinner, you may as well do it right. These tips will show you how to eat your sushi like a pro, and get the best of your Japanese dining experience. 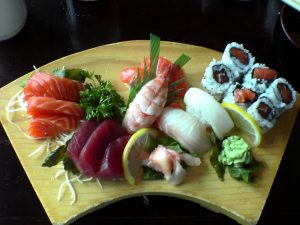 The different varieties of sushi may leave you with question marks floating over your head. Here’s a list of sushi terms that will dissolve some of those question marks: 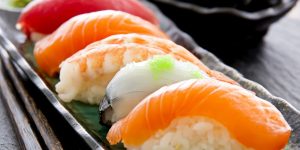 While meat and vegetables are sometimes used in sushi preparations, by far the most popular ingredient in sushi is fish. Here are some common fish cuts of fish used in sushi:

To get the most out of the flavours in the meal, you should eat your types of sushi in a certain order. This info graphic will show you how. 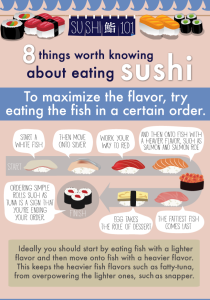 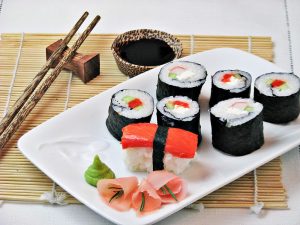 Along with your sushi, you’d have noticed that you get served a dish of soy sauce, a helping of ginger pickle and the infamous wasabi. Here are the commandments for your sides: 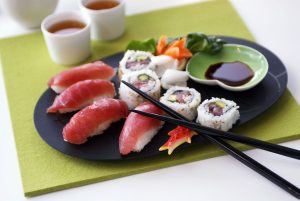 This goes for every kind of food you eat; eat it slowly. Savour the taste.

Dip Yourself In A Bowl Of Noodles, Literally